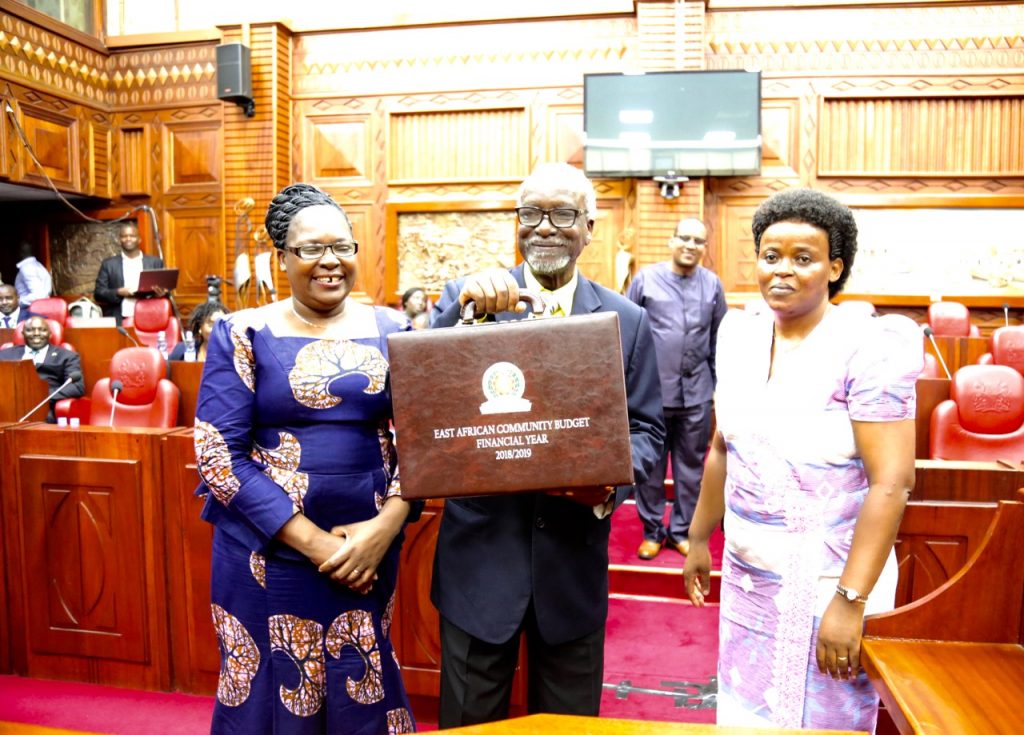 The EAC has presented for consideration Budget estimates for the Financial Year 2018/2019, totaling $99,770,716 to the East African Legislative Assembly Sitting. The Chairperson of the EAC Council of Ministers, and Second Deputy Prime Minister, Republic of Uganda, Rt Hon Dr Ali Kirunda Kivenjija, presented the Budget Speech to an attentive House.

The 2018/2019 Budget themed: “Enhancing Prosperity and Welfare of EAC Citizens” is a step-down from $110,130,184 presented to the House in the previous Financial Year. According to the Chair of Council of Ministers, the Priority Interventions for FY 2018/2019 will focus on enhanced free movement of goods in the region and further liberalization of free movement of labor and Services; improved cross-border infrastructure to ease cost of doing business in the region; and enhanced regional agricultural productivity. Other priority interventions include enhanced industrial development through investment in key priority sectors including leather and textile; skills development, technological advancement and innovation to stimulate economic development. The implementation of the roadmap for the attainment of the EAC Monetary Union; strengthened Peace, Security and Good Governance and Institutional Framework for EAC Political Confederation are also set for consideration.

Other key areas Rt. Hon Dr Kivenjija said, include further consolidation of the Single Customs Territory (SCT) to enhance intra-EAC trade, leading to reduction in the cost of doing business in the region and the development of regional infrastructure, thereby reducing transport costs, and easing cross-border movement of people, goods and services. The funds are also earmarked to enhance implementation of the EAC Common Market Protocol, with particular emphasis on free movement of skilled labour across the Partner States.

Promotion of peace, democracy and security across the Partner States as well as efforts towards full participation of the Republic of South Sudan in the activities of EAC are other areas of priority for the Community in the coming Financial Year.

The EAC is further expected to streamline and further consolidate its operational systems to achieve the desired level of efficiency, accountability, and value for money.

Last Financial Year, the august House approved a Budget of USD110, 130,184. The said amount was earmarked for among others; consolidation of the Single Customs Territory (SCT) to cover all imports and intra-EAC traded goods; Infrastructural development in the region and liberalization of free movement of skilled labour across the Partner States.

The second Deputy Prime Minister cited a number of assumptions on which this year’s budget is pegged on to include the continued and consolidated political support of the EAC integration and the availability of adequate financial resources and remittances. Political stability and good governance as well as safe and stable security across the region are other areas of consideration.

On the global economic performance outlook, the Minister informed the House the global economy had expanded by 3.7 % in 2017, which is approximately 0.5 % point higher than the growth in 2016. The pickup, Rt Hon Dr. Kivenjija added, in global growth was supported by a notable increase in global investment, trade, and industrial production, coupled with strengthening business and consumer confidence. Accordingly, Sub-Saharan Africa’s real Gross Domestic Product (GDP) grew by 2.7 % in 2017 compared to a revised growth rate of 1.4 % registered in 2016. The accelerated growth was mainly due to favorable commodity export prices and strong agricultural production.

Rt Hon Dr. Kivenjija said the region had continued to realise significant growth and development even though there were mixed results. “Mr. Speaker, the EAC region maintained its position as the fastest-growing sub-region in Africa, with estimated growth of 4.6 % in 2017, up from 4.4 % in 2016”, the Chair said.

Strong growth was widespread in the region, with Kenya, Rwanda, Tanzania and Uganda growing at more than 5%. Growth in Kenya was supported by sustained investment in infrastructure and improvement in the service sectors, while in Uganda and Tanzania growth was mainly supported by strong performance in the industry sector. Rwanda’s growth was supported by favorable weather conditions and higher commodity prices. However, the Chair said the economic growth in Burundi and South Sudan remained subdued in 2017, with some signs of steady recovery. GDP growth in Burundi contracted by 1.3 % in 2017 compared with a revised contraction of about 1.6 % in 2016. This was mainly due to sustained impact of suspension of financial aid by major donors, shortage of foreign exchange reserves, and declining investment. Likewise, the Minister stated growth in South Sudan contracted by about 3.5 % in 2017 compared to a contraction of 13.8 % in 2016. Growth deceleration in South Sudan since 2015 has been largely contributed by the combination of low oil prices and reduction in oil production following the ongoing political challenges.

On legislation, the Minister informed the House the Community had enacted among others, the EAC Supplementary Appropriation Bill 2017; the EAC Appropriation Bill, 2017, the EAC Oaths Bill, 2018 and the EAC Polythene Materials Control Bill, 2017. He informed the House that a number of new Bills would be introduced in the coming Financial Year. “Mr. Speaker, during the Financial Year 2018/2019 the Council will propose amendments to the EAC Standardization, Quality Assurance Metrology and Testing Act (SQMT) 2006. The proposals are intended to make it possible to make SQMT regulations by separating metrology matters from SQT matters. The Council also intends to review and bring amendments to laws relating to trade especially the EAC Competition Act, 2006”, Hon Dr Kivenjija said. The Council of Ministers is to further initiate Bills that support the establishment of the East African Monetary Union. In particular, the Council shall initiate the East African Surveillance Compliance and Enforcement Commission Bill 2018 and the EAC Financial Commission Bill, 2018, in compliance with the Protocol on the Establishment of the East African Monetary Union.

The Chair of Council of Ministers further lauded the Assembly for the speed with which it is carrying out with its mandate.

“From what I see and from what I have already experienced in the six months with you, I can only hold the Members of the 4th Assembly in high esteem and high regard because you have hit the road with a lot of enthusiasm and focus. As Council, we only hope that you continue to excel and to hold us even more accountable”, he said.

On Infrastructure, the Minister informed the House of the completion of the Taveta – Mwatate road, which is part of the multinational Arusha – Holili/Taveta – Voi road and its commissioning in July, 2017. On the side of the United Republic of Tanzania, the dual construction of the14 Km long Sakina – Tengeru section, was completed while the construction of the 42-km long Arusha Bypass is in progress. The Minister further informed the House of the completion of the Mombasa-Nairobi standard gauge railway (SGR) line in Kenya and stated the phase II from Nairobi to Naivasha was ongoing and expected to be completed by 2019. “These are backbone lines for the Mombasa-Nairobi-Kampala-Kasese/Kigali and Tororo-Pakwach/Gulu-Nimule-Juba SGR project along the Northern Corridor”, the Rt Hon Deputy Prime Minister informed the House.

Rt Hon Dr Kivenjija remarked that EAC was collaborating with the COMESA and SADC under the Infrastructure Development Pillar of the Tripartite Free Trade Area, to implement the Tripartite Transport and Transit Facilitation Programme. He remarked the collaboration was key in harmonization of policies, standards and specifications in the roads sector.

On Civil aviation and airport matters, the House was informed the EAC Secretariat had completed the draft regulations to guide the Partner States in quest to fully liberalize their Air Transport Services. The rationale for this, the Minister said is in order to achieve improved efficiency, enhancement in capacities and eventually lowering the cost of air transport in the Region. During the period under review, the EAC Secretariat similarly coordinated the operationalization of the EAC aeronautical and maritime search and rescue agreement and the development of an EAC agreement in handling aircraft accident and incident investigation.

On agriculture and food security, the EAC Minister said the region remained committed to fully support implementation of the June 2014, African Heads of State Malabo Declaration on Agriculture Growth and Transformation in Africa.

I am pleased to inform you that the EAC is strongly committed to support implementation of the June 2014, African Heads of State Malabo Declaration on Agriculture Growth and Transformation in Africa. In June 2017 Ministers responsible for Agriculture in the EAC Partner States and other key regional stakeholders signed the EAC Comprehensive African Agricultural Development Programme (CAADP) pact. Further, the EAC Regional Agriculture Investment Plan (RAIP), which will be a key instrument in rallying financial and technical support to spur agricultural transformation was developed and is now awaiting consideration and adoption by the 11thSectoral Council on Agriculture and Food Security.

The Minister called for heightened measures to ensure food security. “Mr. Speaker, the EAC region suffers from frequent food insecurity despite the huge resource endowments and great potential for production of adequate food. Food insecurity in the region is caused by both natural and policy related factors. The EAC Secretariat with the financial and technical support from USAID and East Africa Trade and Investment Hub (EATIH) has developed EAC Regional Food Security and Nutrition Security Strategy (FNSS) and its Action Plan (FSAP) to guide the implementation and actualization of the regional food security objectives”, he remarked.

The House is now expected to debate on the Budget proposals.