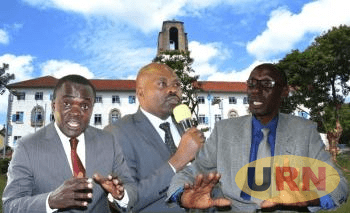 The staffs unanimously pointed out that the decision of the appointments Board Chairperson to order and recommend staff recruitment contravenes Section 2.6.3 (i) of the Human Resources Manual of 2009. The resolutions are contained in a July 4th, 2018 document signed by Dr. Deus Kamunyu Muhwezi, the MUASA Chairperson, Vincent Abigaba, Chairperson MASA and Bruce Twesigye, the Chairperson NUEI addressed to Makerere University Vice Chancellor, Prof. Barnabas Nawangwe.

The staff members note that several officers in the university are appointed in disregard to the laid down procedures. They also contend that the available administrative structure doesn’t involve all stakeholders. And that even the staffs in the Human Resource Department don’t have information about the structure. “There is information that the Chair Appointments Board single handedly drafted the current structure and delivered it to Council,” staff leaders resolved.

According to the Makerere University Human Resource Manual, a good structure requires that once a position falls vacant, an internal advert is run to fill the vacant position before it is advertised externally in case there are no qualified people internally.

“The current appointments and promotions don’t allow this principle and thus disadvantaging internally qualified colleagues,” the staffs add. They also accuse the Board of flouting the process of reviewing the Human Resources Manual, saying business begins and ends in the University council without involving other stakeholders.

“The Appointments Board is a policy organ and shouldn’t be seen doing things against the amendment of the human resource manual. The Associations were never consulted in the process and should be considered null and void. There is also no evidence that this policy went through senate,” reads the document.

The joint executive also resolved that stop gap measure appointments be advertised and those already on such contracts be subjected to interviews before their contracts are renewed. “For as long as there were no minutes from the departments, no advertisements, individuals being considered for a four-year contract without adverts be stopped forthwith. We also note that there are many ghost appointments and must be removed from the payroll,” the joint executive noted.

Recently, URN analysed documents obtained from Makerere indicating that over 60 staff were centrally recruited in the University as stop-gap measure as at 30th of June 2017. University sources indicated that this number excluded majority of staff recruited and paid at Unit level, whose number went beyond 200.

At the joint executives meeting, the staff leaders also demanded that the Independent Staff Tribunal resumes its work without any influence, especially after attracting 12 cases.