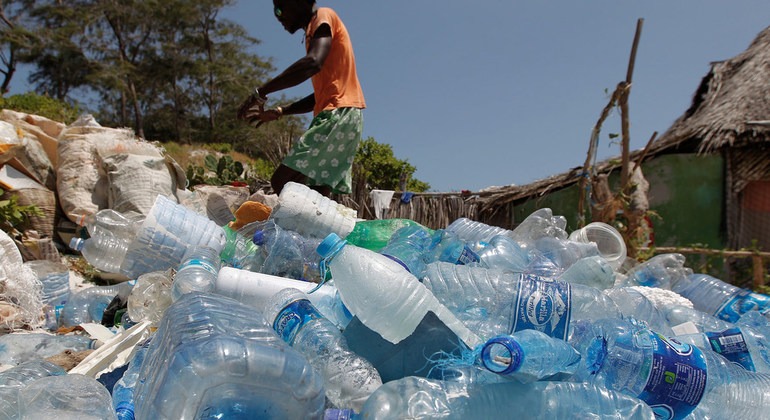 Source UN.
The world must unite to “beat plastic pollution” United Nations Secretary-General António Guterres said in his message for World Environment Day on Tuesday, noting that microplastic particles in the ocean, “now outnumber stars in our galaxy”.

In his message marking the day on 5 June, he said a healthy planet was essential for a prosperous and peaceful future, spelling out that: “We all have a role to play in protecting our only home.”

“Our world is swamped by harmful plastic waste,” he stated. “Every year, more than eight million tonnes end up in the oceans.”

Pointing out the astonishing comparison between stars in the cosmos and ocean plastics, Mr. Guterres underscored that “from remote islands, to the Artic, nowhere is untouched.”

If present trends continue, by 2050 our oceans will have more plastic than fish, he said.

On World Environment Day, Mr. Guterres is encouraging everyone to also stop using plastic products which are designed just to be thrown away, such as plastic bottles.

“Refuse what you can’t re-use,” he asserted.

“Together, we can chart a path to a cleaner, greener world,” concluded the Secretary-General.

Since it was first celebrated in 1974, the Day has helped raise awareness and generate political momentum around global environmental concerns such as ozone depletion, desertification and global warming.

The state of renewable energy
In conjunction with the Day, UN Environment (UNEP), on Monday, launched REN21, or the Renewables 2018 Global Status Report, which paints a positive picture of a renewable power sector characterized by falling costs, increased investment, record-setting installation and innovative business models that are driving rapid change.

The Renewable Energy Policy Network for the 21st Century, or REN21 – supported by UNEP – is a global renewable energy policy network that aims to facilitate knowledge exchange, policy development and joint action towards a rapid global transition to renewable energy.

After years of active policy support – driven by technology advances, rapid growth and dramatic cost reductions in solar and wind – renewable electricity is now less expensive than newly installed fossil and nuclear energy generation in many parts of the world.

But not all of the news is good. There is uneven progress between sectors and across different geographical regions, and a “fundamental disconnect” between commitments and real action on the ground.

The power sector on its own will not deliver the emissions reductions demanded by the Paris Climate Agreement or the aspirations of Sustainable Development Goal 7 to ensure access to affordable, reliable, sustainable and modern energy for all, says the report.

The heating, cooling and transport sectors, which together account for about 80 per cent of global total final energy demand, are also lagging.