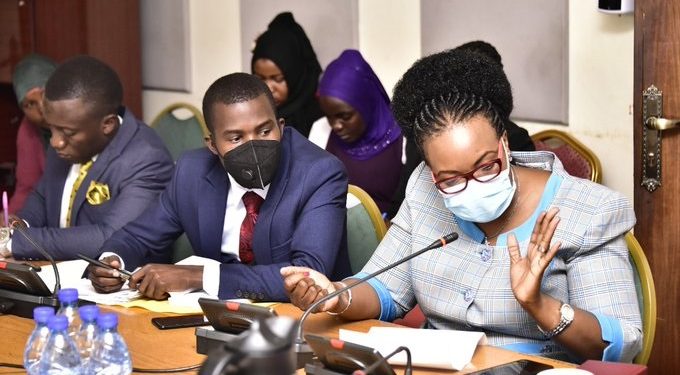 The Minister of State for Housing Persis Namuganza has today stormed out of the parliamentary committee of Rules, Discipline, and privileges, which is investigating her on accusations of misconduct, accusing committee members of bias.

Namuganga left citing illegalities in the probe, wondering why committee leadership has failed to disclose evidence against her. Three MPs have testified against Namuganza today

The minister of State for Housing Persis Namuganza appeared for the second time before the Rules Committee accompanied by her lawyers Norman Pande and Ronald Walakira of Crimson Associated Advocates Kampala.

Rev Fr. Charles Onen (MP Laroo Pece) the vice chairperson of the committee informed Namuganza that the only evidence before the committee is the Hansard that captures Bukooli Central MP, Solomon Silwany, Tororo Woman MP Sarah Opendi, and other MPs, accusing the minister had questioned the integrity of Parliament in different statements captured by the media.

However, the minister informed the committee that she had petitioned the speaker of parliament, raising preliminary objection to the proceedings before the committee of rules which she contends are against the sub judice rule.

Namuganza gave the committee a hard time, asking why they have refused to disclose evidence against her despite several requests by her lawyers.
The drama unfolded when Namuganza fumed and stormed out of the committee in protest before it could hear from witnesses that testified against her later. She accused the committee of bias.

Afterward, witnesses led by Bukholi Central legislator Solomon Silwany testified against Namuganza saying the alleged misconduct of the minister was committed by an official WhatsApp group of the 11th parliament. He noted that Namuganza accused the speaker of appointing the Ad hoc committee to serve individual interests.

Silwany added that Namuganza also appeared on one of the local Television stations and questioned the powers of the Presiding officers of Parliament in setting up Adhoc Committees and their integrity in the same. However, committee members questioned Silwany’s evidence on grounds that it was scanty.

Other MPs including Maurice Kibalya of Bugabula South, and Sarah Opendi the Tororo District woman MP also testified against Namuganza.