The World Health Organisation (WHO) has pledged to work with Parliament and other stakeholders in implementing its new resolution on curbing traffic accident deaths by 50 percent within a decade.

The Head of Safety and Mobility at the World Health Organisation, Dr Nhan Tran, made the remarks in a meeting with members of the Parliamentary Forum for Road Safety in the Speaker’s Boardroom on Monday, 19 September 2022.

“We would like to explore with you, working together to execute the resolution by supporting legislators involved in promoting road safety,” he noted and added that there would be tremendous value in holding a regional dialogue with legislators to have a multi-pronged approach on issues related to road safety.

He proposed that Uganda be the host of the planned regional dialogue because of the lead it has taken in dedicating itself towards the matter.

“One of the tasks mandated by WHO is to monitor progress made by member states in curbing road accidents and this can through pilot studies with members states for a more accurate figures,” he added.

Dr Tran revealed that WHO would engage in further discussions and initiatives with the heads of road safety of member states to support their moves in achieving the resolution.

Hon. Alex Ruhinda, Chairperson of Parliamentary Forum for Road Safety, said that road accidents are usually of topical concern in that moment when they happen and are often forgotten thereafter, something the forum is seeking to turn around.

This forum, Ruhinda noted, seeks to amplify the awareness of road accidents and suppress their occurrence through various interventions, the overall goal being saving lives.

He said that recently, the forum working with the Committee on Physical Infrastructure was successful in persuading government to boost its funding of the road safety component in the Ministry of Works and Transport in the last budget allocation.

“Any country’s development would be hampered if it is losing five percent of its GDP in human capital; we keep losing economically active citizens and assets in traffic accidents,” Ruhinda stated.

He said that most of these people operate businesses which come to an end when they get into fatal accidents.

The Senior Road Safety Officer in the Ministry of Works and Transport, Judith Karara, said government received the global action plan on road safety as proposed by the WHO and is in the process of constructing a national action plan which is a domesticated version of the global plan.

Karara added that the government further committed itself to the UN Conventions on Road Safety.

“These include the African Road Safety Charter, uniform description of wheeled vehicles and goods, agreement on the carriage of dangerous goods among others,” she said.

She noted that the road safety guidelines have been reviewed under the traffic and road safety act that are in line with international regulations and aim to enforce road safety.

Parliamentary Commissioner, Hon. Esther Afoyochan, representing the Speaker of Parliament, requested WHO to multiply its support multi-fold to both the government and the civil society in all road safety initiatives.

She said that often the focus has been drawn on construction of roads neglecting the importance of road safety and therefore asked Members of Parliament to increase their energy in lobbying for better road safety. 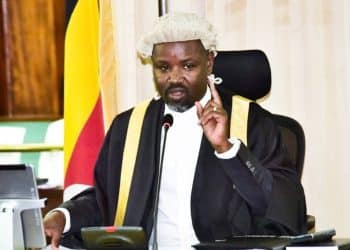