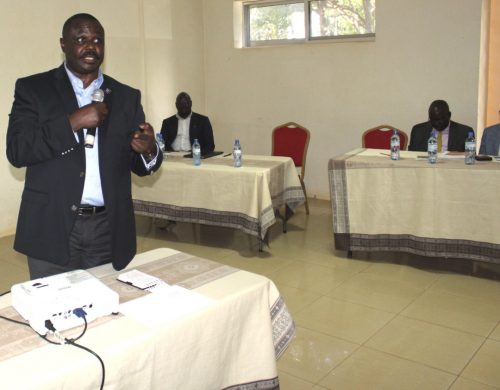 Deputy Speaker and Omoro County MP, Jacob Oulanyah has called upon Local Government Speakers to stand up for what is right and be brave while chairing their house

While demonstrating the guiding principles of Speakership Oulanyah urged the Speakers to be bold while dealing with controversial issues and not show any weakness.

Oulanyah said that many council meetings are marred by boycotts and threats from council members and this sometimes prevents speakers from doing their work properly.

“You represent the people and no one should intimidate you to lean on wrong or anything that is not good for your people, if someone is indiscipline, kick them out”, he stressed.

He cautioned them against divisive politics and implored them to desist from it.

“This issue of using parties to stall development should stop. While carrying out your duties it is important to remember that the end beneficiary will be our people. Ask yourselves; will it help people? Will it help Acholi? The issue of Gulu becoming a city should cause positive excitement everywhere but some people are busy looking for anything negative to say. Let us exude positivity and spread it around us. If someone is thirsty they will need water and it will not be blue or yellow or red water. So let us stop wasting time on such issues and get down to ensuring efficient service delivery” he said, adding that Acholi sub-Region would be far off if politicians looked beyond parties lines.

The Speaker of Pader Local Government Council and representative of Uganda District Council Speakers Association (UDISCA) Mr. Ocen Justin thanked Oulanyah for the initiative and appealed to government to look into increasing the remuneration of speakers and reduction on the ex-gratia /allowance taxation which stands at 30%
Ocen also reminded Oulanyah of the presidential pledge of Local government Speakers which he says has not been fulfilled.

The one day Local Government Speakers Conference which comprised of District Speakers, Municipal Speakers and Council speakers is the first of its kind in Acholi Sub Region and will be an annual event.