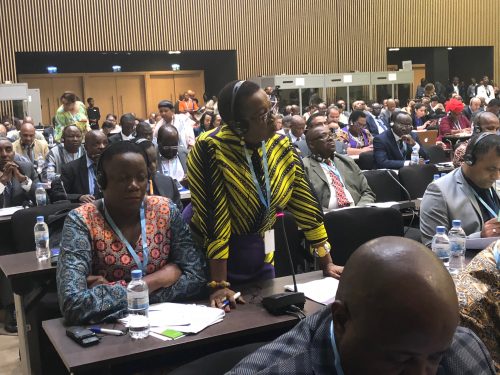 KIGALI, RWANDA: Weak policies and frameworks governing migration in Africa have been cited as the leading cause of tensions between host communities and migrants.

While presenting a paper on Labour Migration and Governance in Africa to Pan African Parliament MPs on Friday in Kigali, Rwanda, Jason Theebe, the Senior Regional Labour Migration expert of the International Organisation for Migration (IOM) said absence of good policies to govern movement of labour has potential to give rise to xenophobia, discrimination, racism.
He urged governments to provide pre-departure and post arrival information to facilitate social integration and protection of migrants.

“Many African countries have challenges in managing migration issues owing to poor collection and management of data; lack of accompanying social protection measures; lack of capacity to handle migration as well as limited knowledge about migration related issues,” he said adding that “This has resulted in jeopardized interstate relations, increased forced labour, irregular migration such as human trafficking and migrant smuggling.”
He said IOM studies established that 80 per cent of African migration takes place within Africa and that the single biggest driver of migration is the search for jobs. He therefore recommended that governments should facilitate social integration of migrants and protection of their rights, including harnessing their development contribution.

“There is a need for a whole of government and society approach to ensure effective migration governance and a need to build capacity in governments and other stakeholders to effectively manage migration,” he said.

The Deputy Chairperson of the Committee on Trade, Customs and Immigration Matters, Hon. Alex Chersia Grant, recommended that more information and interventions on irregular or illegal migration should be provided to potential immigrants to assist them make informed decisions. He said there is need for Africa to invest in labour market competitiveness in order to compete on the international labour market, noting that there are opportunities abroad.

PAP President Roger Nkodo Dang decried the high number of migrant deaths and fatalities while crossing borders and in the high seas.

“We are losing our youths in the Mediterranean Sea and we condemn this. When you go to migrant camps in Libya or the Mediterranean, you will find that lot of them would like to return. The fundamental issue is governance in our states. African youths represent 60 percent and we need to find jobs for them,” he said.

Nkodo said continental and regional agreements on free movement of people and goods should become a reality because it will boost intra Africa trade and create employment for youths, hence addressing the problem.

Prof. Morris Ogenga Latigo (Uganda) argues that the solutions to migration need to be driven by African member states.
“For African countries, we have to do two things, address migration issues as an internal challenge, and then address the migration issue as a regional challenge. The youth are overwhelming in number and African governments should wake up and proactively deal with how to manage that population,” he said.

Hon. Aisha Jumwa (Tanzania) voiced concern about Africans who work under hostile and slave-like conditions especially in Arab countries where some have even lost lives. She urged IOM, and the African Union to look into solving the problem.

The legislators noted that there are constraints in nation states capacity to provide social services to migrants and that governments also have concerns such as border and national security; terrorism and organized crime; public health safety, a case in point being the ebola outbreak in West Africa and Congo.
The policy recommendations suggested to the African Union is to put in place a joint programme on labour migration to strengthen governments and support implementation of labour migration standards and policies. It was noted that when properly managed, labour migration has great potential and opportunities for Africa.

Over 250 legislators from across Africa have converged in Kigali, Rwanda, for the First Ordinary Session of the Fifth Pan Africa Parliament. The sittings started on 22 October and will end on 2 November 2018.