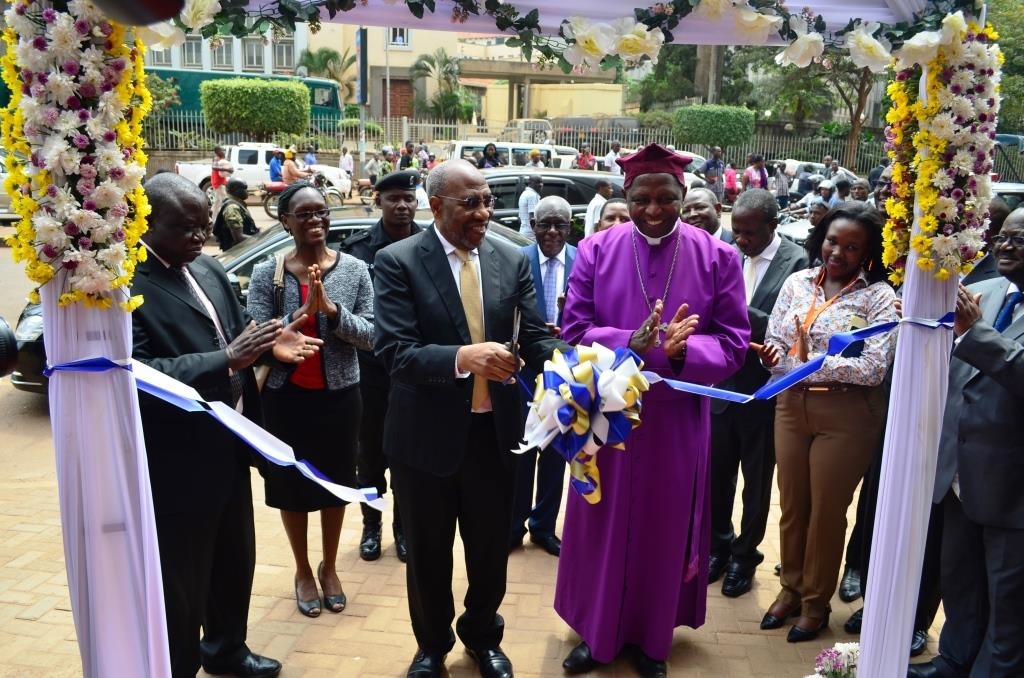 The Most Rev. Stanley Ntagali, Archbishop of the Church of Uganda, welcomed the Prime Minister, the Rt. Hon. Ruhakana Rugunda, who was representing His Excellency, the President of Uganda, Yoweri Kaguta Museveni, as the Guest of Honour at the commissioning of the Janani Luwum Church House during a special function today.

The Archbishop said, “Today is a day of thanksgiving.” He thanked the government of Uganda for the peace in the country that “has enabled us to reach this milestone,” calling Church House a “peace dividend.”

In his remarks, the President said, “I heartily congratulate the Church of Uganda on this accomplishment of a dream come true. This is a significant contribution to our economy, manifested in this imposing building in Kampala’s skyline. I officially commission Janani Luwum Church House.”

Mr. James Mwangi, the Group CEO of Equity Bank, came especially from Kenya for the function. He said, “This has been a project of faith. If you never had the dream, you wouldn’t be here. Thank you for trusting us [Equity Bank] with the dream, and I want to encourage all the Bishops here that this dream can be replicated in all the dioceses.”

Many other significant dignitaries attended the function, including the Rt. Hon. Matia Kasaija, the Minister of Finance, Hon. Ben Luwum and his wife, the son of the martyred Archbishop Janani Luwum for whom Church House is named.

Hon. Shem Bageine, the General Secretary of the Uganda Joint Christian Council, retired Archbishop Henry Luke Orombi and Mama Phoebe, the Group CEO of Equity Bank, the Board of Directors of the Church Commissioners Holding Company Limited, the Board of Trustees of the Church of Uganda (who is also the House of Bishops), retired Bishops and their wives, the Managing Director of Cementers, the Contractor, and many others.

Church House is a 16-floor commercial office building located on Plot 34 on Kampala Road, directly opposite the Bank of Uganda. Equity Bank has already moved their head office operations to the first five floors and are the anchor tenant in the building.

Space is still available for lease and is being managed through Bageine & Company Limited, the Letting Agent.

Archbishop Ntagali thanked His Excellency the President, Equity Bank, Cementers for their work as the Contractor, all of his predecessor Archbishops who carried the Church House baton, especially Archbishop Henry Luke Orombi, who traveled to Nairobi and signed the MOU with Equity Bank. He thanked all the various Board members of the Church House Company and their CEOs over the years, Watoto Church, all Bishops, Dioceses, and Christians who contributed, with special appreciation given to Canon Joram Kahenano, the CEO of the Church Commissioners Holding Company Limited, who oversaw the final phase of construction.