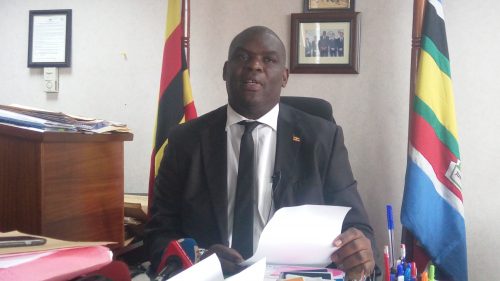 Addressing the press on Friday at the offices of directorate of public prosecutions in Kampala, the director of public prosecutions Mike Chibita noted that he has no evidence that the Kyaddondo east Mp Robert Kyagulanyi Sentamu posessed guns in Arua as it was earlier alleged by the police and it is the reason why he was not charged with illegal possession of illegal firearms when he appeared before the Gulu chief magistrates court yesterday. But Chibita added that he has gathered some reasonable evidence to pin Bobi wine and 32 others on stoning of the presidential car

The DPP condemned torture that was unleashed to politicians in Arua, and directed police to investigate torture allegations expeditiously.

“Following the letter from the President of Uganda Law society in which he pointed out us cases of torture on honourable Zaake and honourable Sentamu, I have written to the director of criminal investigations Department and tasked her to make investigations in those allegations” said Chibita.

Mr Chibita added that police takes the blame of parading the tortured suspects in courts since state prosecutors only come to contact with suspects in courts, he was responding to severe public criticism of his office, for aligning bleeding suspects who were charged with treason together with the Arua municipality MP elect Kasiano Wadri before the Gulu magistrates court.

He called upon journalists and other people who have been tortured in the instant political standoff to report cases at police for justice.

This comes days after lawyers under the network of public interest lawyers came out and tasked the DPP to swing into legal action on perpetrators of torture before they consider private prosecution.