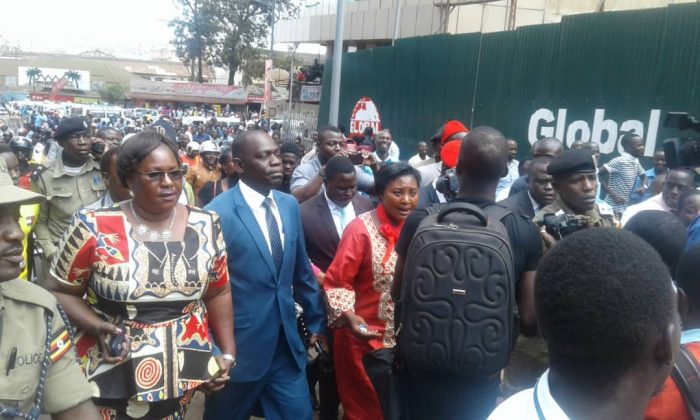 The Kyadondo East Member of Parliament, Hon. Robert Kyagulanyi Ssentamu has shocked the Kampala central police station as he majestically matched to the station in company of a huge crowd chanting his name, escorted by fellow opposition legislators led by the leader of opposition, Hon. Winnie Kizza.

Hon. Kyagulanyi was summoned by police through the speaker of parliament, Rt.Hon. Rebecca Kadada to go record a statement in regard to the illegal city match he orchestrated early this week in protest of the newly government introduced 1% mobile money tax and social media tax.

Matching which started from parliament to the police station through jinja road at around 11am Ugandan time, Hon. Ssentamu was wearing black suite and a red toppy to symbolize, that the battle for change continues. The shock match paralyzed business and traffic in uptown Kampala as the crowd would let free flow of cars and motor bikes.

Upon arrival at the police station, police denied journalists entrance as it also embarked on arresting Boda Bodas (commercial bikes)

However, the opposition in parliament vehemently rejects the cabinet resolution that the 0.5% tax on mobile money be restricted only on withdraws maintaining that the new taxes levied on mobile money transactions and social media use must be scrapped off because they are killing businesses.

Previously, the Mobile Money levy of 1% was charged on deposits, sending money, payments and withdraws. But after discussing the matter in cabinet, a decision was taken that the presidential directive that the levy reduces to only 0.5% be implemented and that it should be restricted on only withdraws

Yesterday, the state Finance minister in charge of planning David Bahati told journalists at Uganda Media Centre that an amendment bill to be tabled in parliament tomorrow will reflect the changes sanctioned by cabinet on Monday.

Still, the opposition Members of parliament led by the leader of opposition in parliament Winnie Kiiza state that, “both taxes must be rejected because they are an impediment and a blockage against expression, interaction, access to information, job opportunities and entrepreneurship.”

Also, the civil society budget advocacy group (CSBAG) added its voice to that of parliamentarians and others Ugandans, calling for the total scrapping off of these taxes on grounds that Ugandans are paying many taxes which are yet to deliver services to their expectation.