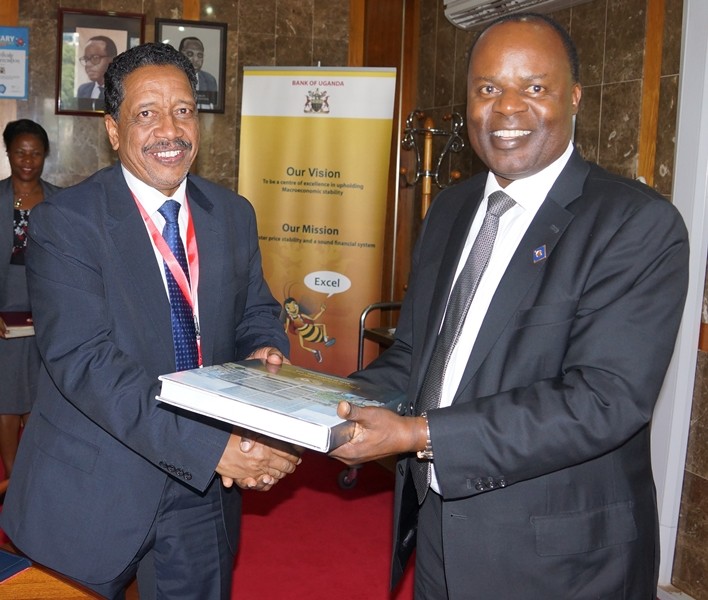 BANK OF UGANDA, CENTRAL BANK OF SUDAN TO STRENGTHEN TIES
KAMPALA- Tuesday, November 14, 2017 – Bank of Uganda (BoU) and the Central Bank of Sudan have
agreed to explore all avenues to consolidate and expand trade and investment between Uganda and Sudan.
This was during a meeting between Bank of Uganda Deputy Governor, Dr. Louis Kasekende, and the
Governor of the Central Bank of Sudan, Mr. Hazim Abdelgadir, on November 14, 2017 at the BoU offices in
Kampala. Governor Hazim Abdelgair who is part of H.E. President Omar Al Bashir’s delegation to Uganda also
interacted with Senior officials of the Bank of Uganda.
The two Principals agreed to charter a formal arrangment through a memorundum of understanding to guide
the two Central banks in the various areas of cooperation such as payments systems and correspondent
banking; capacity building; and other avenues of facilitation of trade and investment between the two countries.
Dr. Kasekende noted, “We can exploit existing opportunities under the Common Market for Eastern and
Southern Africa (COMESA) regional intiative for purposes of trade facilitation such as the COMESA Regional
Payment and Settlement System (REPSS) as well as leverage the financial institutions operating in both
countries to foster economic relations”.
Governor Hazim Abdelgadir on his part, expressed readiness to share Sudan’s rich experience in Islamic
finance and banking in light of the recent legislation that paved way for the introduction of Islamic banking
products in Uganda, and agreed to the proposal to expedite Sudan’s participation in the COMESA REPSS.
Uganda is one of the eight countries that are fully participating in the COMESA REPSS, an electronic platform
which facilitates cross-border payments by allowing faster, cheaper and secure transfer of funds by both
importers and exporters within the COMESA region. In addition to leveraging the regional integration initiatives;
the two Central banks committed to strenghten bilateral relations.
At the end of the meeting, Deputy Governor Dr. Kasekende handed over a copy of a book titled, “The Golden
Odyssey, Bank of Uganda 1966-2016”, published by the Bank of Uganda to commemorate its 50th anniversary

DOCTORS-GOVT MEET ENDS WITH NO SOLUTION BUT HIGH TEMPERS