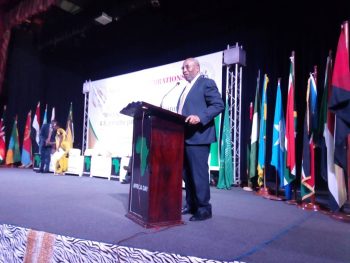 African leaders are being asked to stop bragging around with having too much wealth most of which has been acquired from engaging in acts of corruption and illicit trade with wrong elements.

It is estimated that Africa losses between USD.60 to USD.150 Bn annually to graft and illicit business with over 75%of the continents’ earning are repatriated back to the home countries of the malti national companies through illicit trade well known by African leaders and then 5% of the funds meant for development is being swindled by African leaders which has kept the continent stagnated when it comes to economic and social growth.

Giving his speech at the ceremony to mark the day of Africa in Kampala today, the dean of diplomatic heads and missions, Rt. Maj. Gen George expresses worries over the continuity of the corruption among African leaders and top officials, saying this on the other side compels the ordinary citizens to engage in the same act so as to have a better life and according to George this must stop if the continent is to register faster growth.

However, the Prime Minister of Uganda, Rt.Hon. Ruhakana Rugunda mentions that Africa has for long been portrayed by foreign media as a continent of wars and conflicts, something he says has been solved as witnessed with peace among African countries with only seven countries having conflicts which are being handled internally.

He then urges Africans to see to it that the image of the continent is completely changed to attract faster growth.

But a scholar from Makerere university school of political science, Julius Kizza advises African leaders to always appoint bright and committed civil servants who will help drive faster growth and crack down graft. Kizza says this was the same channel the current developed countries took to register the current growth we all want to have.

Justice Irene Mulyagonja attributes the enormous theft of public resources to grand corruption and only benefits one person which morally wrong and people don’t agree with it.