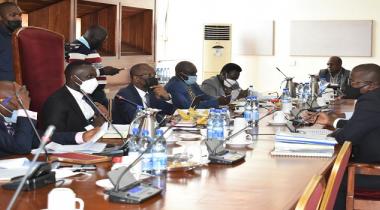 The parliamentary committee on Commissions, Statutory Authorities, and State Enterprises has queried officials from the Privatisation Unit over controversial disposal of Uganda Railway prime properties.

Five prime properties in Kampala were sold off without being advertised to attract bids which COSASE found irregular and directed the Privatisation Unit to produce bid documents and Valuation reports.

The inquiry into the controversial sale of Uganda Railway Properties continued today with members on COSASE  quizzing officials of the Privatisation Unit on circumstances under which prime properties were disposed of.

The Committee tasked the Privatisation Unit which sold part of the land to explain why some properties were sold off without advertising them to potential bidders.

Moses Mwase the Director Privatisation Unit told the committee that they never advertised some properties because they ring-fenced their first priority to sitting tenants although he failed to adduce the legal framework that guided the decision.

Hell broke loose when MPs put Privatisation Unit officials on spot to explain how several prime properties were sold to a few individuals who happen to be big shots in government including Robert Mwesigwa the Mbarara Division North MP who obtained four properties out of 15 and Gen David Sejjusa.

COSASE has asked for Bidding documents and Valuation reports to ascertain whether there was no favoritism and connivance in the disposal of the properties in question.

The Privatisation Unit labored to explain why Uganda Railway Corporation has taken over 10 years without receiving its proceeds amounting to 69 Billion shillings accumulated from the sale of its Nsambya land which the government allocated to private investors. Mwase told the committee that their efforts to pursue the money from the ministry of finance has ended in futility.