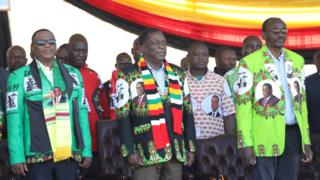 Zimbabwe President Emmerson Mnangagwa has survived an apparent bomb attack in the city of Bulawayo.

Footage from the blast at White City Stadium appears to show Mr Mnangagwa leaving the stage after addressing supporters when a device went off.

He was not hurt, his spokesman said. But senior officials are among those injured, Zimbabwe media say.

The president was in Bulawayo to campaign ahead of nationwide elections due on 30 July.

Presidential spokesman George Charamba issued a statement recalling: “There have been multiple attempts on the president’s life over the past five years.”

The Zimbabwe Herald newspaper reported that Vice-President Kembo Mohadi had suffered leg injuries in the bomb blast, but there is no confirmation.

Other senior officials are also said to have been injured, as well as some of their bodyguards.

Who is Emmerson Mnangagwa?

Media captionEmmerson Mnangagwa: Who is the man known as the ‘crocodile’?
Known as “the crocodile” because of his political shrewdness – his Zanu-PF faction is “Lacoste”
Received military training in China and Egypt
Tortured by Rhodesian forces after his “crocodile gang” staged attacks
Helped direct Zimbabwe’s war of independence in the 1960s and 1970s
Became the country’s spymaster during the 1980s civil conflict, in which thousands of civilians were killed, but has denied any role in the massacres, blaming the army
Accused of masterminding attacks on opposition supporters after 2008 election
Says he will deliver jobs, and seen as open to economic reforms