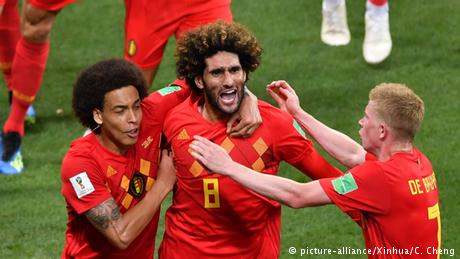 This year’s World Cup has been an unpredictable affair as heavyweights have fallen like flies. But Belgium’s comeback win over Japan suggests the Red Devils may finally be ready to fulfill their potential.

Fußball WM 2018 Belgien vs Japan (picture alliance / Xinhua News Agency)
Belgium have long had a glut of talent at their disposal, a team boasting star players who have shone at club level on the biggest stages week in, week out. But the old cliche of star players not making a star team has followed them around ever since the phrase “golden generation” escaped the lips of hopeful fans and envious opponents.

However, after their come-from-behind victory over Japan in the World Cup round of 16 on Monday, the country’s bright array of shining lights could be ready to show the world they are ready for its adulation.

Faced with a two-goal deficit against the underdogs, the Red Devils could have cowered like a whimpering, injured beast, just as they did in Euro 2016 when falling to relative minnows Wales. But they instead bit back, launching the comeback of the tournament.

Indeed, it was the first time in 48 years that a team has overturned a two-goal deficit in a World Cup knockout match. Results like these often prove to be catalysts for future champions, and with a team as star-studded as this Belgium outfit, it would be folly to suggest they can’t go all the way.
View image on Twitter
View image on Twitter

OptaJoe
✔
@OptaJoe
1966 – Belgium are the first team to come from 2+ goals down to win a World Cup knockout round match within 90 minutes since Portugal beat DPR Korea 5-3 in the 1966 quarter-final. Eusebio. #BEL #WorldCup

Often, the missing ingredient for talented sides is leadership. It’s a quality that can’t be coached, can’t be coaxed, and can’t be conjured up from thin air. Germany have discovered as much, lacking the strong presence of a Bastian Schweinsteiger and finding themselves bundled out at the group stage.

Belgium, for all their talent, appear to now have a number of strong dressing-room figures ready to step up when needed.

Romelu Lukaku, who admittedly had a poor game against Japan, has emerged as a loud voice during pregame team talks. He’s scored four goals in three games to give Belgium that necessary attacking juggernaut in the front line.

Thibaut Courtois not only boasts a generous dose of self-confidence, but also backs up his words on the pitch. While the return of ex-captain Vincent Kompany is a massive boost to any dressing room, as well as any defensive wall.

But the biggest change at this World Cup has arrived from arguably the biggest star – Eden Hazard.

The Chelsea man has long threatened to break into the mould of a true superstar, but has never managed to shake the shackles and move to the next level. In Russia, it could be his time.

Prior to Monday night’s clash with Japan, Hazard was questioned about the elimination of world beaters Lionel Messi and Cristiano Ronaldo, the undisputed two best players in the world.

“They are not in the World Cup, so now it’s time to shine,” he told reporters before the match.

Hazard may not have been Belgium’s best on Monday night – that would go to Thomas Meunier – but he certainly stood up when his team needed a boost.

Every time Hazard received possession against Japan – particularly in the first half – his opponents immediately appeared uncomfortable, desperate to bring him down as quickly as possible, to diminish his escalating threat with minimum damage suffered.

He was brought down on more than one occasion before being able to impose his will on the match, he hit the post straight after Japan’s opener, and he provided the inch-perfect cross for Marouane Fellaini to rise high and head home the crucial equalizer.

Squawka Football
✔
@Squawka
Eden Hazard has scored or assisted in each of his last seven games at major tournaments for #BEL:

12:37 PM – Jul 2, 2018
1,724
1,414 people are talking about this
Twitter Ads info and privacy
Coupled with his dazzling performance against Tunisia, Hazard has easily been one of the World Cup’s standout players. His determination to lead his side to victory, and prove himself on the world stage where other greats have fallen, could prove decisive in Belgium finally fulfilling their undoubted potential.

“That was a test for the team and its character,” head coach Roberto Martinez said after the topsy-turvy match.

“No negatives. We survived it, we have gone through and that is the most important thing.”

Martinez, for all his detractors, changed this game with his substitutes. With Belgium reeling after goals by Genki Haraguchi and Takashi Inui put Japan ahead, Martinez threw on Fellaini and Nacer Chadli. Both scored, sealing the incredible 3-2 victory.

For that Martinez deserves credit, but his players were the ones who got the job done. And Martinez was right to focus on the positives, praising their strength in character. They were relentless in their pursuit of victory in normal time – as were, admirably, Japan – and that attitude won them the match with virtually the last kick.

We believed in ourselves until the last minute ! #REDTOGETHER with our fans @Fanclub1895 ! Looking forward to face @CBF_Futebol #BRA

1:38 PM – Jul 2, 2018
2,397
925 people are talking about this
Twitter Ads info and privacy
The resolve needed for a team to come back from such dark depths, particularly with the burden of a “golden generation” tag hanging over them, cannot be dismissed. While Belgium are nowhere near a perfect side, they can comfort themselves with the fact that no such international team currently exists.

“It is a day to be very proud of these players,” Martinez said. “Keep believing in Belgium.”

The belief and confidence evident in this team could prove crucial against Brazil, their opponents in the quarterfinals. If these star players continue believing in Belgium, in themselves, in the “golden generation”, as a team, and carry on playing as a team, the elusive recipe for success could be within their grasp.