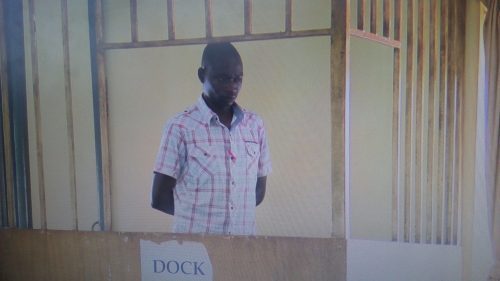 The General court sitting in Makindye has today convicted a UPDF soldier Lance Corporal Kenneth Owani over defilement and sentenced him to two years and three days in prison. Owani was found guilty of seducing Maurine Atimango a 16 year old resident of Gulu barracks and forced her into sexual intercourse which resulted into unwanted pregnancy.

Owani was arrested in march 2013 and charged for defiling a16 year old Maurine Atimango in the Gulu based Unit Disciplinary court which later committed him to the fourth division court martial in Gulu for trial. He was found guilty and sentenced to 7years in prison but he appealed the judgement in the general court on grounds that the lower court did not effectively evaluate evidence and did not consider the two years he spent on remand.

Today when delivering to the judgement, the chairperson of the general court martial Lt. Gen. Andrew Gutti ruled that the evidence which was based on by the court division court martial was substantial enough to convict Owani. The court however found out that the lower court errored on the sentence when it refused to consider the 2 years the convict had spent on remand.

Lt Gen. Gutti then subtracted the 2years from the seven, and also the three years he has spent on sentence since 2015 and sentenced Owana to two years and 3 days imprisonment