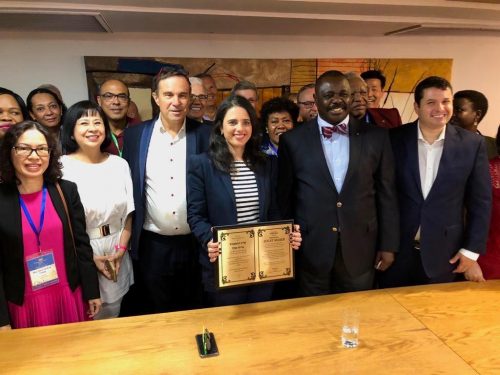 The Deputy Speaker of Parliament, Jacob Oulanyah, says differences in opinions and beliefs have stalled progressive development of some nations in the world and caused unending conflict in areas where people fight for control of territories.

The Deputy Speaker made the remarks in a meeting with the Israeli Justice Minister, Hon. Ayelet Shaked, at the Ministry of Justice in Jerusalem, Israel.
Oulanyah told the meeting of the concept of Ubuntu, which he explained as an African notion that means sharing and unity, which can protect and keep the world at peace, as well as promote economic growth.
“Ubuntu means, I am because we are and nobody wins until we all do. The rivers, lakes and mountains that separate us are not deeper than the blood that connects us as human beings,” added Oulanyah.

Hon. Ayelet Shaked said there was an urgent need to create a forum under which worldwide support can be channeled to Africa and also enable Africa to contribute to world economic growth.
“I visited East Africa for the first time this year and I told our ambassador that we need to strengthen the relationship between Israel and the African nations,” said Ayelet Shaked.

She also called on the delegates at the meeting to advocate for the establishment of embassies of their countries in Jerusalem in a bid to strengthen international relations.

The Deputy Speaker attended the meeting accompanied by the Leader of Opposition, Hon. Betty Aol Ocan and MPs Hon. Francis Gonahasa (FDC, Kabweri County), Hon. Everlyn Chemutai (NRM, Bukwo) and Hon. Anne Mary Tumwine (NRM, Ntoroko County).
The legislators are attending the 2018 annual All Nations Convocation in Jerusalem that brings together delegates from over 100 nations and gives them a chance to renew their faith in God, and also places a platform for Government leaders to meet and share ideas on how to improve governance.

At the meeting, the president of the Convocation, Pastor Tom Hess, presented the 12 Annual Covenant Award to Hon. Ayelet Shaked for exemplary service in honoring and supporting God’s work in Israel.
“Your exemplary leadership as Minister for Justice of Israel and standing in an uncompromising way with the Jewish community in Judea, Samaria and Jerusalem is highly appreciated,” said Pastor Hess.

North and South Korea commit to ‘era of no war’

North and South Korea commit to 'era of no war'