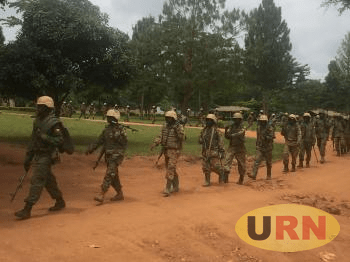 General David Muhoozi, the Chief of Defence Forces, has asked soldiers heading to Somalia for the African Union Mission (AMISOM) duties to be alert and return alive.

At least 1800 officers and troops will leave for Somalia this month where the Ugandan army forms the bulk of the 22,000-strong AMISOM force fighting the al-Shabaab terrorists.

The al Qaeda-linked group on Easter Sunday raided the AMISOM base at Quoryole, Bulomareer and Golwein in Lower Shabelle region in Somalia, leaving eight UPDF soldiers under the dead and six injured according to official army and Government figures. While other sources put the number of dead and injured higher, the UPDF insisted that it lost only eight combatants and revised the number of dead on the enemy side from 12 to 130.

Now as 1822 more soldiers head out to Somalia, the military leadership has emphasised that they should remain alive, as a dead soldier cannot protect the Somali civilians.

Speaking during the send-off of Battle Group 24 at Singo Military Training School, General Muhoozi said they have got lessons from the deaths of soldiers in Somalia, and they know what to avoid and what to pursue.

He urged the soldiers, commanded by Colonel Jackson Kayanja, to be vigilant and fight hard so that they can return back as ambassadors of their families, of Ugandans and of the UPDF.

Muhoozi appealed to the soldiers not to doze off while in Somalia, saying that the consequences can be bad since this is war.

According to Muhoozi, the UPDF has gone hard on the terrorists and they will continue hitting them. He says the UPDF has been giving the al Shabaab a thorough beating since 2007 when Uganda deployed its initial force in what would become AMISOM.

Major General Sam Kavuma, the Deputy Commander Land Forces, asked the soldiers to take good care of themselves so that they are able to fight the war. He said the soldiers should first remain alive to defeat all attacks by terrorists.

Kavuma says the soldiers have all the necessary skills and should be able to do the job.

Justine Adong, a soldier under Battle Group 24 says as a woman she hopes to restore dignity among women in Somalia by working with them and protecting them. Adong says Somali women get abused by terrorists and need a lot of support.

She says she is excited to go to Somalia.

Battle Group 24 replaces Battle Group 21 which was commanded by Col Chris Ogwal. They will be based in Arabisca, 31 kilometres outside Mogadishu.

According to Major Harries Will, a soldier with the British Army training the UPDF, the soldiers have undergone a six-month training in basic combat, psychological rehabilitation, approach to different scenarios, handling accidents, and relating with people among other things