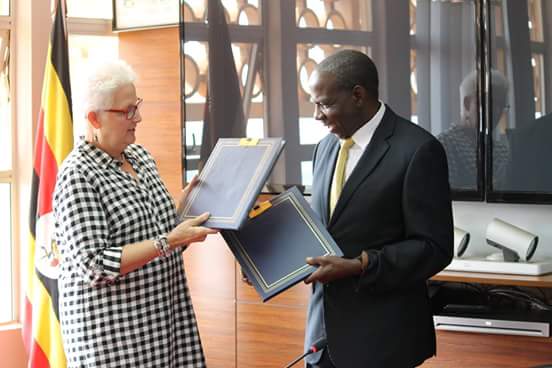 The US Ambassador to Uganda, Deborah Malac, has said Uganda has not taken full advantage of the Africa Growth and Opportunity Act (AGOA).

Uganda is one of 38 African countries eligible for tariff-free and quota-free access to the US market. AGOA allows over 6,000 products to be exported to America.

The AGOA arrangement has been in place for close to eighteen years but there are concerns that Uganda has not fully exploited this preferential trade opportunity.

Ambassador Malac in an interface with journalists at the US Embassy in Kampala raised the same concern.

A 2015 study by the Economic Policy Research Centre (EPRC) blamed the failure by Uganda to tap into AGOA on what it called a home-grown problem. The study lead led by Dr. Alex Ijjo, a senior EPRC Research Fellow, pointed out lack of competitiveness and unsupported environment.

The researchers said Uganda’s production is characterised by the use of basic technologies, little control over production conditions, high costs of electricity, high cost of finance and infrastructural deficiencies among others.

They also said there was no clear strategy on AGOA, adding that even after the government had set up the Export-Led Growth Strategy Unit (ELGSU) to expedite export related issues, a number of challenges continue to haunt the initiative.

Malac admits that absence of an AGOA strategy is one of the bottlenecks that Uganda is yet to overcome under the second phase renewed almost three years ago.

Uganda and other East African countries are currently engaged in a running dispute over the decision by EAC member states to phase out or ban the importation of used clothes and footwear from United States, UK and China.

The decision forced the office of the U.S. Trade Representative in June 2017 to initiate an out-of-cycle review of the eligibility of Rwanda, Tanzania and Uganda to receive benefits under AGOA.

The review was in response to a petition by the Secondary Materials and Recycled Textiles Association (SMART) that the decision by EAC to phase out or ban importation of used clothing and footwear was imposing significant economic hardship on the U.S. used clothing industry.

The Donald Trump administration this month went ahead to suspend Rwanda from AGOA beneficiary countries.

Malac says there are negotiations with Uganda to ensure that it does not suffer the same fate.

Some experts have insisted that despite AGOA, there is need to close the trade imbalance that exists between US and Uganda.

Signed into law in 2000, the African Growth and Opportunity Act promotes trade and investment in sub-Saharan Africa, including through substantial trade preferences. The arrangement was renewed in 2015 to run for ten years.

In order to qualify for AGOA trade benefits, partner countries must meet certain statutory eligibility requirements, including making continual progress toward establishing market-based economies, the rule of law, political pluralism, and elimination of barriers to U.S. trade and investment, among others.

UPDF Flags Off 1800 for Somalia, CDF Tells Them to Return Alive