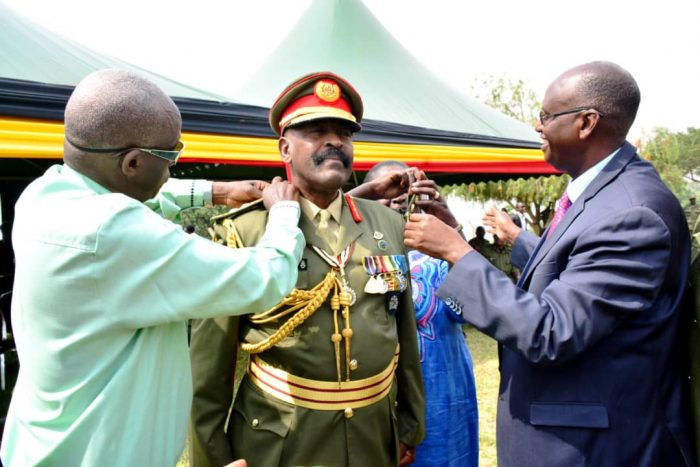 Hon Rwamirama said the foundation of UPDF thrives on the Commander-in-Chief’s recognition of discipline as a core value for the success of any mission. He added that the discipline and hard work led to the promotion and decoration of the day’s officers. “Your discipline is a sign of confidence and has made you promoted accordingly,” he noted.
Hon Mwesige, in his message, warned the newly promoted officers against bad behavior that could later result in poor health or over spending. “Do not indulge in things that will keep you down but carry the flag high,”.

Promotions in the army follow so many criteria and considerations he told the newly promoted officers.

According to the minister, the Commander-in-Chief of the Armed Forces Gen Yoweri Museveni recognized their services towards peace building and decided to reward them appropriately but cautioned the retiring officers to plan for their retirement packages and continue serving in different capacities. He further encouraged them to avoid spending lavishly.

In his remarks, Uganda’s Minister of Security Gen Elly Tumwine noted that every day is unique and that good things are only seen by those who stay disciplined. He told the newly promoted officers that they belong to the great UPDF family that has scored tremendous progress under the command of President Museveni.
Gen Tumwine encouraged the newly decorated officers to stay together because the future belongs to the organized. He mentioned that at the senior level, they had agreed to form an investment club for the Generals and their Spouses on top of the other savings from Wazalendo. The newly promoted were also urged to remain good ambassadors from a disciplined force built on strict maintenance of discipline, respecting organizational values and having integrity. Gen Tumwine further remarked that freedom fighters do not retire in their pursuit for peace and stability, urging the newly promoted officers to continuously serve the country whenever called upon.

The Chief of Defence Forces Gen David Muhoozi congratulated the newly promoted officers and their spouses, saying that serving UPDF is a special calling that requires one to wait for that special day and wait to celebrate the special day. “As we celebrate your promotion, we also celebrate the UPDF because UPDF has made us shine,” Gen Muhoozi told the newly promoted officers.
He reminded them that the added ribbon (rank) means additional responsibility and expectation, and how to responsibly manage them will make them make a positive contribution. “Ranks are an organizational tool that help ease work, positively inspire others, used to enforce discipline and help in building team spirit, among others,” noted Gen Muhoozi.

The senior most decorated officer and Master of Ceremonies of the Chancellory Hon Gen Ivan Koreta on behalf of other newly promoted officers expressed gratitude to President and Commander-in-Chief for entrusting them with higher authority, saying promotions do not only recognize great performance but act as a sign of trust that one can perform better. He implored them to use wisdom when taking great care of Men and Women under their charge and also reminded them to preserve their health.
The UPDF Chief of
Personnel and Administration Brig George Igumba as he presented the list of decorated officers to the Chief Guest urged soldiers to continuously work harder so that they can reach the zenith of their careers just like others have done before. “Always keep whatever you get and do not cry for whatever you do not have,” Brig Igumba said.

The auspicious decorating event was also graced by the attendance of the Minister of Internal Affairs Gen Jeje Odongo, Minister of State for Works, Transport and Communication Gen Katumba Wamala, MODVA/UPDF under Acting PS Mrs. Edith Buturo, Members of Parliament, Members of the High Command, UPDF Chiefs and Directors, among others.