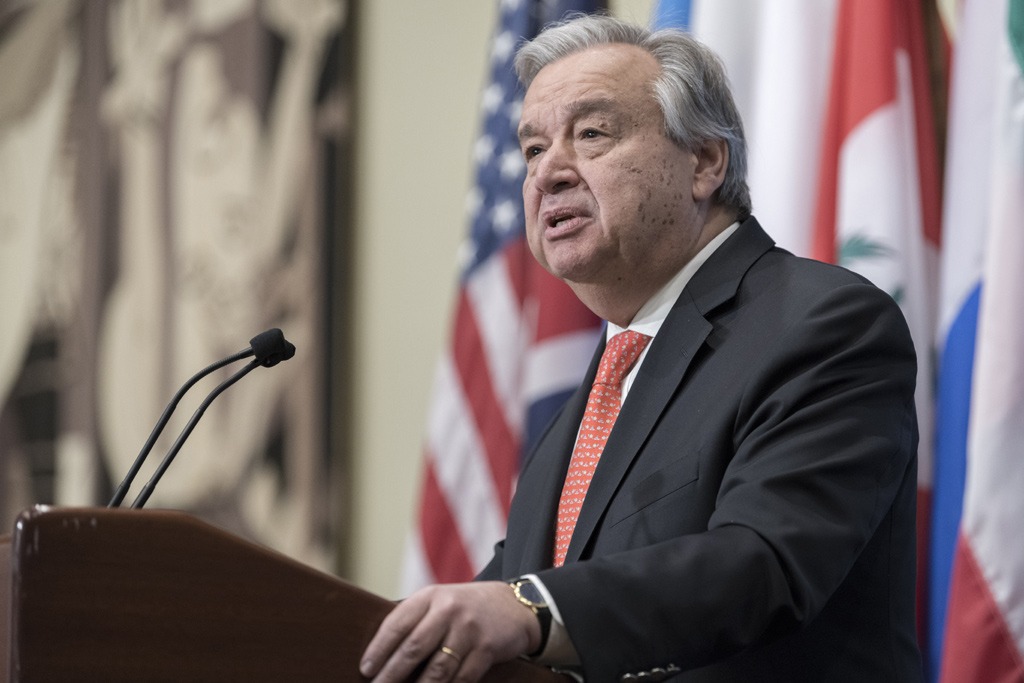 Secretary-General António Guterres on Friday made clear that the United Nations will not tolerate sexual harassment “anytime, anywhere,” within its ranks and laid out a five-point plan to ensure equality across the Organization, which he said was critical to tackle on the challenge of such behavior.

“I reaffirm my total commitment to the UN’s zero tolerance policy on sexual harassment,” Mr. Guterres told the press at the Organization’s Headquarters in New York.

Noting that like sexual abuse and sexual violence, sexual harassment is rooted in the historic power imbalances between men and women, the UN chief said he is well aware of the male-dominated culture that permeates governments, the private sector, international organizations and even areas of civil society.

“This creates obstacles to upholding zero tolerance policies on sexual harassment, including here at the United Nations. I am determined to remove [those obstacles],” he said.

Because equal rights and representation are so important in this regard, he launched a gender parity strategy at the UN, and for the first time in its history, the same number of women occupy senior management positions as men at the UN Secretariat; In fact, 23 women to 21 men.

“This is a start,” he stressed, urging equality at all levels and outlining some concrete steps to address sexual harassment, including taking every allegation seriously, past and present, and making sure all staff affected know what to do and where to go for help.

He said a new helpline for staff within the Secretariat who seek confidential advice will be operational by mid-February.

Mr. Guterres has also established a Task Force of leaders from across the UN system to step up efforts to tackle harassment and boost support for victims, including mandatory staff training on this issue.

He has also strengthened the protection of whistleblowers and reminded staff of their duty to call out sexual harassment and to support those affected.

A survey among Secretariat staff will be conducted soon to obtain better information on prevalence and reporting rates.

“In this effort and beyond, my message is simple: we will not tolerate sexual harassment anytime, anywhere,” he said. “And we will continue to change the dynamic and put greater power into the hands of women to prevent and end sexual harassment and all abuse of power in the UN.”

The Secretary-General also addressed the topic of the Syrian political process and the Russia-sponsored Congress of the Syrian National Dialogue in Sochi, to which Mr. Guterres dispatched his Special Envoy for Syria, Staffan de Mistura.

First, it embraced a vision of Syria for all Syrians – as reflected by the 12 living intra-Syrian principles put forward by de Mistura in Geneva late last year.

Second, the Congress affirmed that a Constitutional Committee should be formed under UN auspices in accordance with Security Council resolution 2254 (2015).

He said that there is an understanding that such a Committee should at the very least comprise the Government, opposition representatives in the intra-Syrian talks in Geneva, Syrian experts, civil society, independents, tribal leaders and women. It would also include adequate representation of Syria’s ethnic and religious components.

Third, the Congress made it clear that a final agreement on the mandate, terms of reference, powers, rules of procedure, and selection criteria for the composition of the Constitutional Committee is to be reached in the UN-led talks in Geneva.

“My Special Envoy will now draw on this Sochi outcome to meet our shared goal: full implementation of Security Council Resolution 2254 and the Geneva Communique,” Mr. Guterres said.

Turning to the humanitarian situation in Syria, he noted that over the last two months, not a single convoy of life-saving relief has reached a besieged area – no medical supplies and no food.

He appealed for humanitarian access, strict respect for international humanitarian law and, in particular, the protection of civilians.

“I call on the Government and opposition delegations and all States with influence to cooperate with my Special Envoy,” he said, stressing that the UN-led process must move ahead in Geneva, credibly and seriously because “we don’t have a moment to lose.”