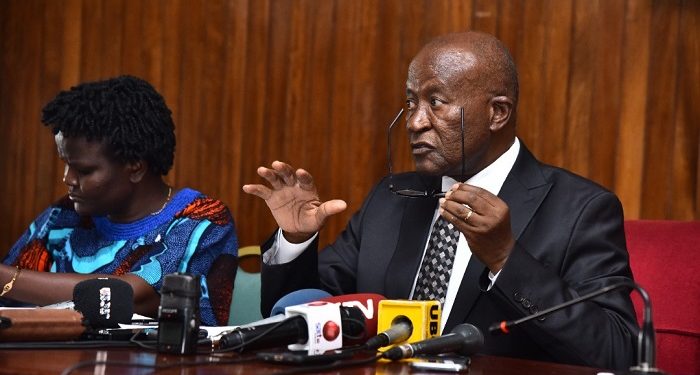 A section of legislators from Uganda’s National Resistance Movement (NRM) Party has vowed to fight attempts to lift the ban on Genetically Modified crops.

This development comes in the wake of last week’s decision by Kenya to lift a decade old ban on GMOs. Proponents argue that this will help address food insecurity challenges the country is grappling with at the moment as a result of extreme drought.

Now, while addressing Parliamentary journalists on October 14, 2022; Buturo claimed that the same narrative is being sold to authorities in Kampala in the hope that it will inform a policy reversal.

“Some of our leaders and scientists are actually greedy and selfish, they have been given money and so they are now on the side of those who are preaching that we should allow, Genetically Modified Organisms (GMOs) are those that are unpatriotic. The idea that you should allow a situation to take away your independence and sovereignty on account that you have been given money is a very treacherous and patriotic thing that is really not acceptable,” he alleged.

“Many of these scientists are on the payroll of those who are originators of GMOs. They receive salaries, are funded, given grants, training and not surprisingly they are now on the path of persuading Ugandans to accept a disastrous GMO situation,” Buturo added.

Suffice to note, President Yoweri Museveni has on two occasions, 2017 and 2019; refused to assent to the Genetic Engineering Regulatory Bill citing a litany of controversial issues.

In a July 22, 2019 letter to Rebecca Alitwala Kadaga the then Speaker of Parliament, Museveni noted “the issue of GMOs and Genetic modification of our seeds, livestock and now I hear GMO mosquitoes, touches not only science, but agriculture, ecology, food and national security and indeed the sovereignty of our nation. It is therefore of the utmost importance that we proceed with caution and include the necessary safeguards in this law.”

Fast forward, Buturo warned that any change in mind will subject Uganda and Ugandans to unparalleled slavery.

“What they really want is to control you. They have taken away everything and now the little area we have that we call food they want to take it away. They are saying abandon your seeds, they are not good enough, we have better seeds and sadly some of our people are foolishly accepting that situation that, we should; now be in a state of affairs where we are fed by others,” he exclaimed.

“Imagine a whole continent of Africa being fed by all these multinational organizations with all implications of that. That you will be fed and they don’t stop there, they say every season you must buy our seeds because it is a seed that has been patented, you cannot own it. It is theirs, so every season you have to buy. They are asking us to move away from independence to some extent to dependence,” Buturo further illustrated.

Fast forward, he stated that a bill aimed at countering this development is in the offing and its contents shall be made public at designated time. Part of the areas, this law is expected to address include the establishment of plant gene banks.

“Clearly we have an issue on our hands; introduction of GMOs is a suicidal move that can only be supported by people who don’t love Uganda. Eminent scientists have said there are no benefits. Of course, those who are for GMOs have all these good things they are talking about these GMOs but the truth of the matter is that GMOs are a disaster as I have said and my colleague has repeated much of Europe has said no to GMOs. Fifty countries in Africa out of fifty four have said no to GMOs,” Buturo hinted.

Dr. Otaala on the other is afraid that the adoption of GMO technology is likely to lead to a spike in non-communicable diseases such as heart defects.

“You find one person having a plethora of these diseases all at once and it has been noted that these diseases shot up from the time GMO crops were introduced. Within 13 years, the number of cases of these new diseases shot up by more than 13% and that is alarming and when you see advanced countries in Europe saying no, I think we need to be cautious as a developing country not to accept GMOs,” he cautioned.

“Each one of us has what we call genes and these genes if I can put simply are the blueprint of what and who we are as different individuals. So what GMO does is that, it tries to alter what makes you who you are by altering the genes or blueprint in terms of who you are. And what they do in terms of genetic modification is that they insert a terminator gene, a gene that stops you from reproducing what and who you are,” Otaala explained.