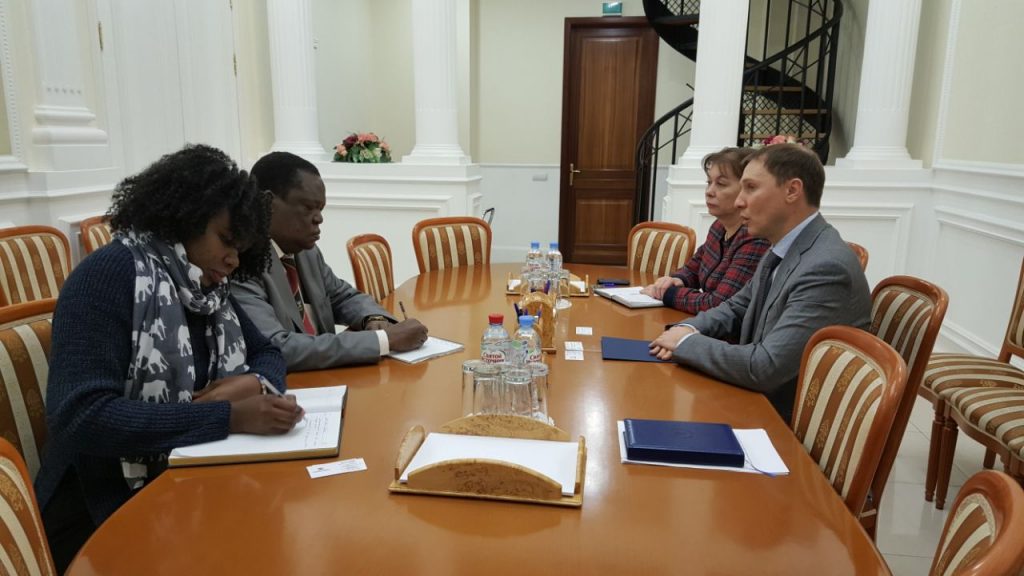 Uganda’s Ambassador to the Russian Federation, H.E. Johnson Agara Olwa paid a courtesy call to the Russian Chamber of Commerce on December 4th 2017 in Moscow. The Ambassador together with the Embassy Staff met the Director of International Cooperation Department, Mr Alexander Kopkov and his delegation.

The purpose of the meeting was to start the preparatory process of the upcoming 2nd Intergovernmental Commission between the Government of Uganda and the Government of the Russian Federation; scheduled to take place in May 2018.The Intergovernmental Commission is aimed at strengthening the relationship between the two countries that has existed since 1962.

The Ugandan delegation will comprise of both Government Officials and Business Representatives. It will include officials from The Uganda National Chamber of Commerce and Industry who signed a Memorandum of Understanding with Russia in 2009. In this MOU, Uganda is to promote trade, investment and tourism between the two countries. Some of the areas of investment include; agriculture, mining, infrastructure development and the tourism sector.

While Russia has a keen interest in mining, renewable energy and machinery among others, Uganda is inviting Russian Investors to consider investing in Coffee, tea and fruits among other products that Uganda is exposing to the Russian consumers.

Following a restructuring exercise in July 2017, the Ministry of Foreign Affairs and Missions abroad have increased emphasis on promoting Uganda as an investment destination, under the Commercial Diplomacy Program. END