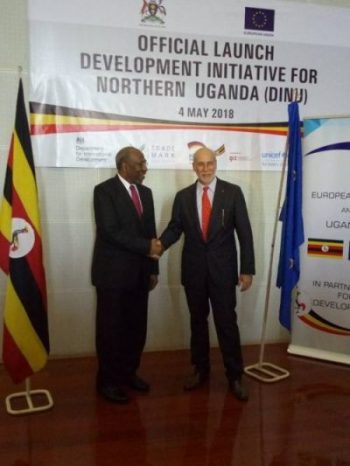 The government of Uganda together with the European union have launched a six years programme dubbed, development initiative for northern Uganda, (DINU) that is geared at causing social, economic, good governance change in the two regions of Karamoja and northern Uganda which will cost over UGX. 600 billion.

The coming of DINU is to consolidate stability in the region, to eradicate poverty and under nutrition and also strengthen the foundations for sustainable and inclusive socio-economic development with main focus on infrastructure development and improve agriculture among citizens.

Speaking at the launch of the new programme in Kampala, the prime minister of Uganda, Rt.Hon. Ruhakana Rugunda stressed the need to have the implementers of the programme to see to it that the programme leaves foot marks on the ground as a sign of effectiveness compared to the past and existing programmes.

He further challenges implementers to be cognizant of pressing issues like, land rights, access to water, youth unemployment which are still threatening the consolidation of the post war recovery.

Now the EU ambassador, H.E. Atilillio Pacifici reveals that though the region has been receiving a lot of attention over the past decades, impressive progress has been made since the return of peace and stability, he still highlights some challenges facing the region which has been over come in other region mentioning the huge influx of refugees from S.Sudan which he says need to be tackled aggressively if the regions are to register the desired growth.

However, the state minister for northern Uganda, Grace Kwiyucwiny and the minister for Karamoja, Moses Kizige have hope that the programme will bring positive change in the lives of communities which have been left behind for so long.

However, local leaders from the selected districts are calling for more districts to be included on the programme as this will address the the challenges affecting the regions among them being, poor road network, poverty, poor health, unemployment among others.

Transport infrastructure in the regions shall also be improved through rehabilitating and upgrading of the Atiak-Adjumani-Moyo-South Sudan border road, Atiak-Laropi section and shall be managed by UNRA in cooperation with the ministry of works and transport with the office of prime minister to do the over sight roll since local governments, NGOs and CSOs are among the implementing partners in the programme.

The regions have for years had development programmes run bu both govt and development partner all geared towards addressing social, economic and good governance issues in the regions which include, NUSAF, PRDP, KALIP among others.