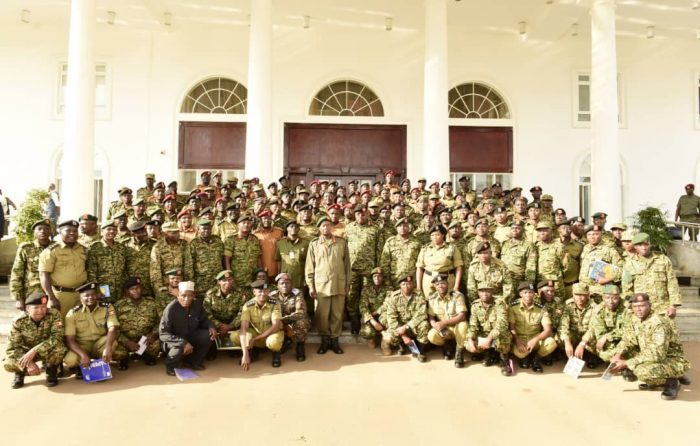 President Yoweri Museveni has said that Uganda became a failed state shortly after gaining independence from Britain in 1962 because of the politics of identity.

“Uganda became a failed State because of politics of identity. What do people need? They need prosperity. This is through economic activities. One has to produce and sell what he produces best. Prosperity is achieved when products are bought,” he said.

The President made the remarks yesterday (Sunday) at State House, Entebbe during a lecture that he presented to 109 Senior Officers of the Uganda People’s Defence Forces (UPDF), the Uganda Police Force and the Uganda Prisons Services who are attending a 70 days’ Political and Leadership Course at the National Leadership Institute (NALI) in Kyankwanzi District.

The President, who is the Commander-in-Chief of the Defence Forces, reminded the Officers of the crucial need to appreciate ideology and strategy. He informed them that ideology is like medicine saying that if one is a medical Doctor, his job is to diagnose the ailment afflicting the patient before recommending a prescription.

He said that when the National Resistance Movement (NRM) members conducted the diagnosis over Uganda’s affairs, it was observed that the pre-colonial society was organised defectively. He added that the obtaining situation led to our being colonised. He noted that in 1912 the African National Congress (ANC) was launched in South Africa as the first political Party in Africa. The ANC, he said, identified the reasons why the Kings failed in their roles to protect the people. He said when NRM came to power it was already aware of the fact that discrimination does not solve anything.

The President noted that at the time of independence Uganda had 2 unprincipled rivalries along tribes and religion adding that in 1962 the voting was done along religious lines which led to non of the parties winning a majority and inevitably this led to a coalition between UPC and Kabaka Yekka but the alliance was short-lived.

The President stressed to the officers in particular and all Ugandans that the first principle that citizens of Uganda should appreciate is that of patriotism because it serves everybody’s interests. He noted that patriotism is ant-sectarianism and goes a long way against backwardness. He reminded them that Uganda also needs to be in the East African and the African economic blocs to ensure a good market for our products because pan-Africanism forms a strong pillar of our prosperity.

The President further told them that social economic transformation forms another vital principle and that prosperity is premised on modern production. He also told them that democracy was a major component in the promotion and advancement of society. He revealed that NRM worked along these principles of ideology in its revolution.

While stressing the importance of the development of the human resource, the President also said infrastructure development (railway, roads and electricity, among others), is pertinent to reduce the cost of doing business. He emphasized that the practice of exporting raw materials must stop because it leads to the export of job opportunities. He called for the engagement of the youth in production activities so that they are able to realize their potential.

NALI Commandant, Brig. David Kasura, revealed that the strategy of the on-going course is to make the participants understand and further appreciate Uganda’s national strategic interests. He added that the target was also to enable them become agents of social transformation