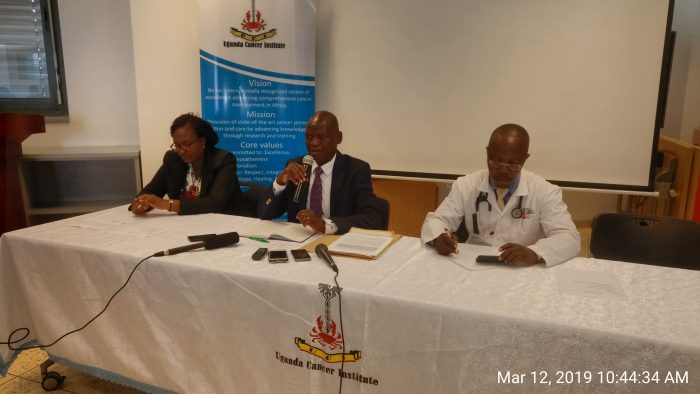 By Adiga Julius and Acaye Henry

According to Dr Orem, a special study was carried on the cost effectiveness of treating childhood cancers with a focus on Burkitt Lymphoma in Uganda, a case that has picked the interests of the international community.

According to the study up to 55% of the children, that suffered from burkitt lymphoma, survived two years after treatment.

He noted that for children diagnosed with cancer, the cost of delivering treatment services has, until recently, been largely assumed as too expensive and not cost effective, with little to no evidence from low and middle income countries to support these assumptions.

However a recent study carried out at Uganda cancer institute has debunked this myth by demonstrating that the treatment costs associated with pediatric Burkett lymphoma care in Uganda are surprisingly modest and very cost effective.

“on average ,the cost you need is 1350 dollars to treat a child ,if get that kind of money in the treatment of burkitt lymphoma ,you likely to cure that child and you also likely to get value for money Dr Orem explained”.

He said that Uganda cancer institute has been credited for being a plausible cost effective pediatric treatment center in Africa.

Improvements in childhood cancer outcomes depend heavily on the ability of health systems to coordinate early accurate case detection and referral and provision of supportive care for treatment associated complications.

Dr Orem said that such findings provide evidence to policy makers to prioritize resources to cancer treatment since they are not just to waste.

He hailed ( UCI) partners Fred Hutchinson Cancer center and the government of Uganda for the continued funding of its programs that has led to such a success of being internationally recognized.