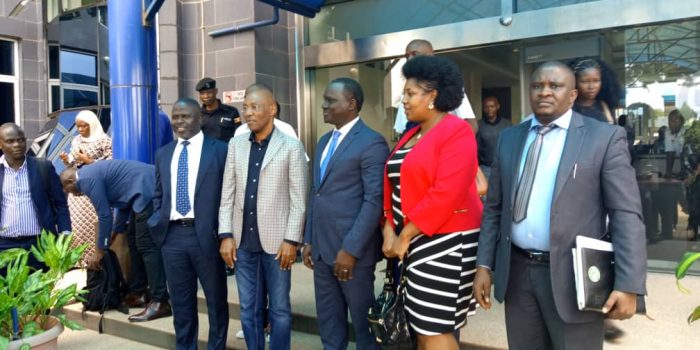 Officials from Uganda Communication Commission (UCC) and National Association of Broadcaster (NAB) today have agreed that embattled journalists step aside for 30days as investigations commence, a huge sign that the communications regulator has again overpowered Uganda’s broadcasters.

This comes after the telecommunications regulator ordered for the immediate suspension of 39 producers, heads of programming and heads of news from 13 media houses over alleged breach of minimum broadcasting standards during the coverage of the arrest of Kyadondo East MP Robert Kyagulanyi on April 29 in Busabaala.

This morning officials from NAB led by Kin Kariisa met UCC officials headed by the Executive Director Godfrey Mutabazi at the UCC offices in Bugolobi to harmonise on the directive that has been widely criticized.

“We don’t care whether they [your company] puts you in another position, but for as long as that position was investigated, you will step aside so that we can freely investigate,” Mutabazi said.

Ibrahim Bbosa, UCC, Head of public relations and International Relations, said that the investigation will dwell on among others the academic qualifications of the named journalists, breach of journalistic principles and ethics, professionalism and minimum broadcasting standards.

“NAB requested for this meeting and today, they laid their concerns before us. We agreed that the editors especially those who were in charge on 29th April, step aside to allow investigation and this investigation will take 30days,” Bbosa said.

Bbosa said that no editor or journalists will be sacked as alleged and that it is the outcomes of the investigation that will inform them of their next step.

“No one is going to be sacked, but we have simply agreed that they step aside from the current positions they are holding. The outcomes of the investigations will guide us on the next step,” he said.

“We shall continue to broadcast as the Commission kick starts its probe on the affected journalists.” Says, the President of NAB, Kaliisa.

However, Uganda journalists under their mother body Uganda journalist association filed a case against the directs last week with the fast hearing of the application in which Bwire Arnold and Byansi Henry are seeking for an interim injunction against UCC directives suspending head of programming, producers and News managers of 13 media houses starts on Wednesday 08/05/2019, at 11am before justice Lydia Mugambe at high court civil division twed Towersin Kampala.

The secretary general UJA, Mr. Bayola Moses on many occasions has challenged the directive by UCC saying they are out of law and over step the mandate of the commission.

But the national coordinator, Human Rights network for journalists (HRNJ) Robert Ssempala has adds his voice to that of others to rally journalists to speak with one voice and challenge the directives among other brutal acts orchestrated by UCC if media freedom is to really be realized in Uganda.

On many occasions, UCC has ordered for the closure of media houses on grounds that they have not met the required broadcasting standards.