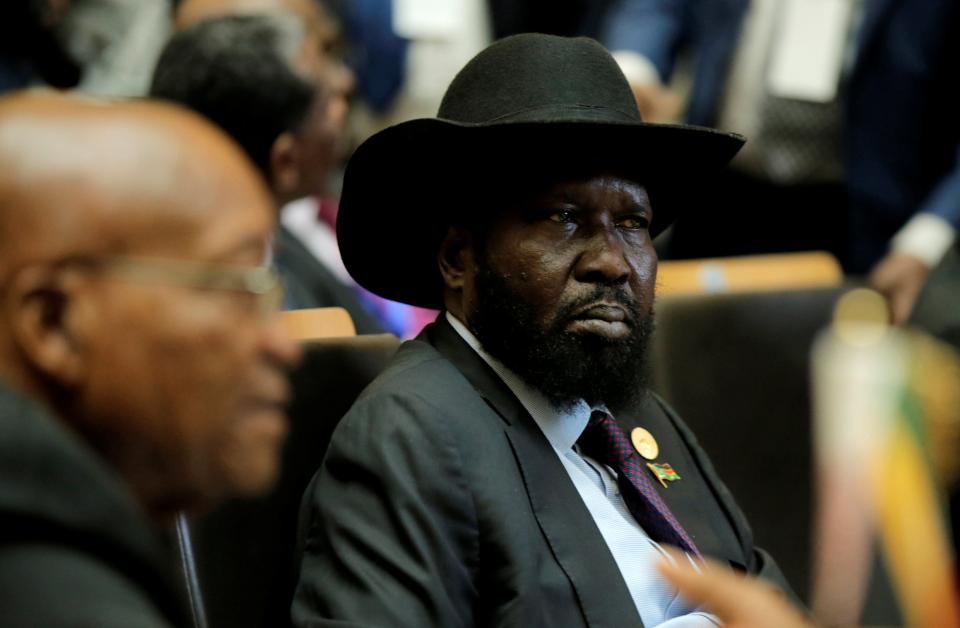 South Sudan's President Salva Kiir Mayardit attends the 30th Ordinary Session of the Assembly of the Heads of State and the Government of the African Union in Addis Ababa, Ethiopia January 28, 2018. REUTERS/Tiksa Negeri

South Sudan’s President Salva Kiir Mayardit attends the 30th Ordinary Session of the Assembly of the Heads of State and the Government of the African Union in Addis Ababa, Ethiopia January 28, 2018. REUTERS/Tiksa Negeri

“The Department of State today announces that it is implementing restrictions on the export of defense articles and defense services into South Sudan,” State Department spokeswoman Heather Nauert said in a statement.

While the United States does not conduct arms sales with South Sudan, the move prevents any U.S. company or citizen from providing military equipment or defense services to the country’s warring factions. The unilateral arms embargo is another signal by Washington that it is losing patience with South Sudan’s leaders after ceasefires have been repeatedly violated. In South Sudan’s capital Juba, Kiir’s spokesperson Ateny Wek Ateny declined to comment. The Trump administration urged neighboring countries and African groups, such as the eight-member Intergovernmental Authority on Development, to sanction South Sudanese officials who are aiding the conflict. “We encourage IGAD and the African Union to consider sanctions measures against those who undermine the peace process,” Nauert said in the statement.

Some top officials close to Kiir have already been sanctioned by the United States, including the once-powerful army chief Paul Malong, who was later fired and forced into exile when he quarreled with the president. The African Union on Monday said it was open to imposing sanctions on leaders violating ceasefires in South Sudan, joining a chorus of officials who say those prolonging the conflict must be punished. “We need to act against those who, with impunity, are continuing to massacre their peaceful populations,” the head of the African Union commission, Moussa Faki Mahamat, told reporters at the AU Summit held in the Ethiopian capital, Addis Ababa. U.S. ambassador to the United Nations Nikki Haley told the U.N. Security Council last week it was time to impose a U.N. arms embargo on South Sudan. Haley visited South Sudan in late October and met with Kiir. The Obama administration attempted in December 2016 to convince the United Nations to back an arms embargo against South Sudan. Any U.S. push for the U.N. Security Council to take further action against South Sudan is likely to be resisted by veto power Russia. The council sanctioned several senior South Sudanese officials on both sides of the conflict in 2015. “The time has come to acknowledge the hard reality that the leaders of South Sudan are not just failing their people, they are betraying them. And so this Council is at a crossroads,” Haley told the council last Wednesday. “We cannot stand by idly as innocent civilians are murdered and raped.”

Oil-rich South Sudan has been wrecked by civil war since 2013, when troops loyal to Kiir clashed with troops loyal to then-Vice President Riek Machar. The conflict has claimed tens of thousands of lives since then, slashed oil production and driven about a third of the population of 12 million from their homes.

The European Union imposed an arms embargo on Sudan in 1994, which was amended to also apply to South Sudan when the country gained independence from Sudan in 2011. Independent U.N. experts have reported to the U.N. Security Council that South Sudan’s government has spent millions of dollars on weapons as the country slid into famine and an economic crisis. In January 2016, U.N. experts reported that sources had told them: “Uganda either supplies South Sudan with its own stock or acquires the weapons and then transfers them to South Sudan, without necessarily involving or obtaining the consent of the primary seller.” Last year, the U.N. experts said: “Weapons continue to flow into South Sudan from diverse sources, often with the coordination of neighboring countries.”