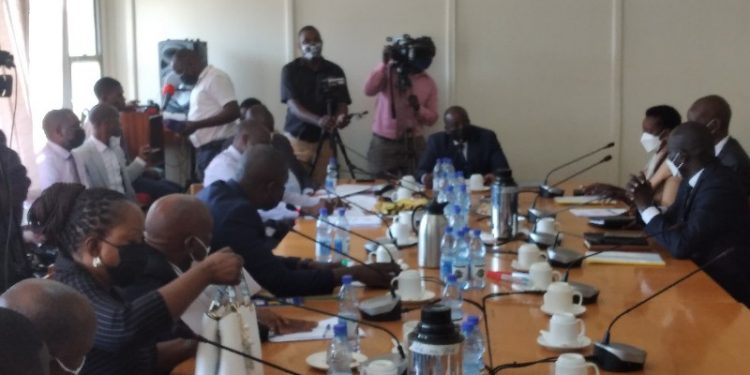 The fate of Presidential Directives on Roads

The Uganda National Roads Authority has explained difficulties in implementation of presidential directives for construction of strategic road projects; saying some contractors recommended by the president table bids with inflated costs.

UNRA was meeting the parliamentary committee of physical infrastructure from where the Oppositions Shadow Minister of works Yusuf Nsibambi threatened to drag the government to court over what he called illegal direct procurement.

Recently President Yoweri  Museveni directed UNRA to award the construction of Kanoni-Misingi-Mityana(37km) to Zhongmei Engineering Group whereas Chongqing International Construction Corporation(CICO) will be in charge of the Kabwohe-Kitagata-Rukungiri(65.7km) and Misindye-Kabimbiri- Zirobwe-Wobulenzi-Kapeeka(138km). He also directed UNRA to award the projects to construct Mpigi-Kibibi-Mityana(60km),Kanungu-Hamulwa(47km), and Butogota-Buhoma(32km) to Ashoka Buildcon Limited, an Indian company.

The parliamentary committee of physical Infrastructure, today interfaced with officials of the Uganda National Roads Authority (UNRA) to establish the fate of implementation of presidential directives which were issued outside the PPDA act.

The UNRA officials led by the executive director Allen Kigina explained that all companies that are beneficiaries of the presidential directives have been subjected to the direct procurement processes as stipulated in the PPDA act.

However, UNRA revealed without mentioning the name, that one of the companies that were recommended by the president to be offered construction projects has been rejected because its bid cost is way above UNRA cost estimates by three times.

However, the shadow minister of works Yusuf Nsibambi has put UNRA on notice that he is going to challenge presidential directives in the Constitutional saying they violate the PPDA laws.

UNRA has been tasked to provide the committee with information on all roads and contractors that have benefited from presidential directives.