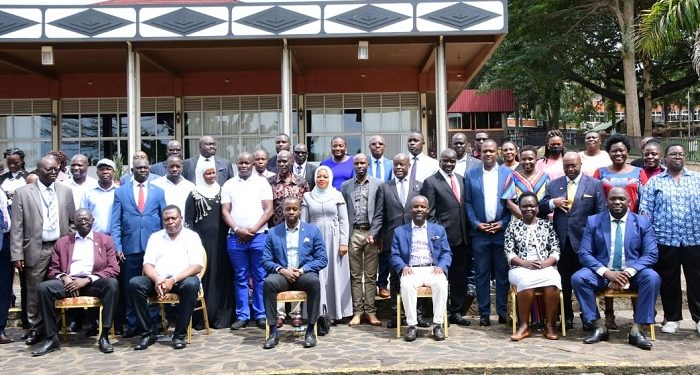 The Deputy Speaker of Parliament Thomas Tayebwa has asked the private sector in Uganda to invest in the manufacturing of anti-malarial products from within the country.

This he says is a way of creating a more resilient fight against the disease that has persistently ravaged communities.

He was speaking at the Imperial Botanic Hotel in Entebbe on Friday morning where Members of Parliament from West Nile were being briefed on the forthcoming launch of the indoor residual spray against malaria-causing mosquitoes.

Tayebwa is worried that with the experience of the Covid-19 pandemic, the country may lose the fight against malaria if another global catastrophe occurs leading to a cut-off of the supply of products including those used in the fight against tropical diseases.

“I argue the private sector to take advantage of this and we start investing heavily because we don’t know where the world is moving next. You have seen the disruption of covid-19 where we were cut off completely. What if another epidemic breaks out and it cuts us off for five years? Are people going to survive malaria if we are cut off on imports?” Tayebwa asked.

The deputy Speaker revealed that before going to the meeting in Entebbe, he first joined the Equity Bank Group Chief Executive Officer, James Mwangi to launch a $25b programme which is aimed at supporting different sectors in recovery and resilience of Africa. Most of the money, Tayebwa said, is going to manufacturing, hence tipping the private sector in Uganda to go for it in order to venture into anti-malarial supplies production.

At least 20 percent of the deaths recorded in Uganda every year are attributed to Malaria. The disease, according to Dr. Charles Olaro, the Director for Curative Services in the Ministry of Health contributes to 50 percent of inpatients and 20 percent of outpatients in health facilities.

Tayebwa said that the continuous importation of essential products used in the fight against malaria is a big risk the country needs to overcome as soon as possible because the world is changing rapidly.

“Why are we still importing these products? So I argue the private sector to take this chance. If you look at the money that is involved you see that we are losing a lot. The import bill of Africa is $547b while Uganda’s national budget is $15b dollars. So you can see how much we are losing as Africa” he added.

Happy with the commitment of the MPs from West Nile, one of the most hit areas in the country, the Deputy Speaker said that Parliament as an institution should take lead in the fight against malaria by engaging the government on providing for appropriation enough money for the cause.

He said that there is a need for a conversation around the fight against malaria because the geographical location of Uganda means that the population will live with it but there is need for more resilience since prevention and treatment is expensive.

“The fight against malaria is a fight for survival. It is not like a fight for eating. It is really a problem. It means as Parliament, we should take the lead in this fight because in the end when people die you are the ones who give mabugo (condolences). These Ministers cannot send mabugo to your constituencies. So let’s take the lead and we indeed do support the issue of funding” noted the Deputy Speaker.

He argued the government to give malaria similar attention that was put on the fight against Covid-19 because it is causing problems in the communities and is expensive to treat without specific funding efforts.

Dr Olaro told the legislators that the reason why West Nile has been chosen for the implementation of the indoor residual spraying is because it is highly burdened by malaria.

“Whereas the national prevalence based on malaria survey stands at 9 percent in the west Nile region it is at 22 percent” he said.

He said that the Ministry has made significant progress in the fight against malaria but the prevalence remains high hence a need to look for other approaches in addition to the distribution of mosquito nets, case management and testing.

Dr Timothy Batuwa, the Chairperson of the Parliamentary forum on malaria said that there is also need for guidance by the technical people on which kind of chemicals will be continuously used in indoor spraying to get sure of good results.

The Chairperson of the Parliamentary Committee on Health, Dr Charles Ayume said that much as malaria has persistently ravaged Uganda and other countries in the Great Lakes region, there is no need to give up on the fight.

“Now it is up to us to adopt and to make the major breakthroughs that will chase this malaria out,” said Dr. Ayume, the Koboko Municipality MP.

He said that currently, it is easy to treat malaria if there are enough supplies like rapid testing kits in all health facilities and therefore the Government needs to provide a significant budget for that purpose.

Dr. Ayume also revealed that during a recent Committee tour of Busoga and Bukedi sub-regions, they found that despite the high prevalence rate, anti-malarial drugs were not available.

He said that engagements have been made with the National Medical Stores to ensure that supplies are sent to the area.