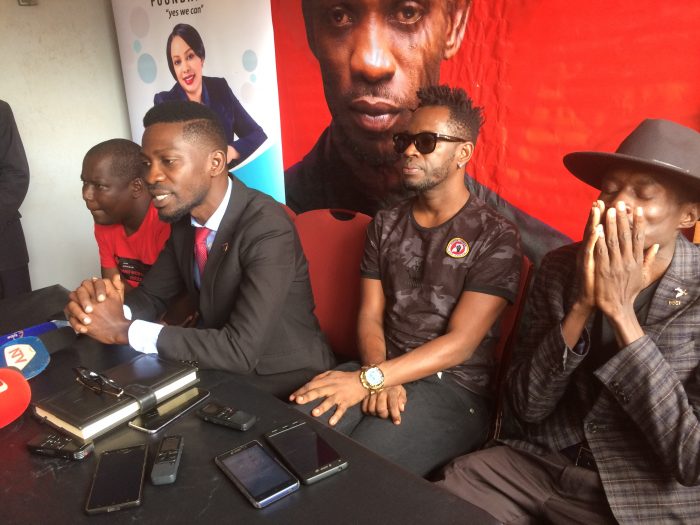 Members of the August house have this afternoon lashed out at government over the unclear circumstances under which MP for Kyadondo East Robert kyagulanyi aka Bobi Wine was arrested and confined at his home in Magere on Monday this week.

The concerned members of parliament say it is against the rights of honourable MP kyagulanyi that police up to now has failed to explain to him the reasons as to why he’s being held hostage at his own home rendering him a prisoner at his home.

However,the state minister of internal affairs Obiga kania Mario says police has preferred criminal charges against Bobiwine and that he will later on be taken to the courts of law to account for the crimes which he commited , though his statement just infuriated the already angry MPs who tasked the speaker in chair right honourable Jacob Oulanya to intervene in the matter at hand.

In his response deputy speaker Jacob Oulanya advised government to take the MP to court if he has committed any crime rather than locking him up at his home .

According to woman MP kasese district Winnie Kizza, government should stop turning people’s houses into prisons because this will force them drag government into courts of law and it should also stop fabricatinga crimes against individuals.The leader of opposition in parliament MP Betty Awol Achan has also warned government to stop pushing people to commit crime because Ugandans will be forced to rise up to defend their rights.

This follows the Easter monday events where the honourable member of parliament Robert Kyagulanyi aka Bobiwine was stopped from putting up his music concert of kyalenga at his beach in Busabala for which he tried to resist and so ended up being arrested and taken to his home where he’s been put on house arrest.