Stella Nyanzi Refuses To Move Out Of Luzira To Court 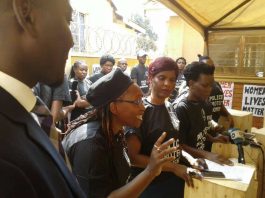 ASP Brenda Fussy Habaasa however could not give to Court any  reason or problem be it health that might have stopped Nyanzi from  attending Court, because she is not even admitted at the Prison’s Sick Bay.

She explained  that when she called out inmates this morning at the women’s wing,  Dr. Stella Nyanzi  instead told her  that  her Lawyer, Isaac Ssemakadde  refused her to go to Court.

In Court , her Lawyer Isaac Ssemakadde  sent a clerk with a letter dated 16th/January/2019 indicating that Dr. Stellah Nyanzi ‘s Private Medical Doctor,  advised her to stay away from the trial,  as it might further stress her in light of a mis-carriage she suffered 2 weeks ago.

Ssemakadde further served the same document to Resident State Attorney Janat Kitimbo asking that Nyanzi’s trial be temporarily  stayed until when she will get post -arbortion treatment.

The same letter has also been served to the Uganda Prisons Headqtrs and Luzira Prison where Stellah Nyanzi is currently detained, on charges of cyber harassment and offensive communication against the head of State President Museveni and his late mother Esteri Kokundeka.

However , Prosecution objected to Ssemakadde’s request to have the  trial halted and said it was a deliberate move for the Lawyer and his Client to frustrate this case.

Kitimbo then  asked Presiding Magistrate Gladys Kamasanyu to go a head and make a ruling on the legaality of the charges Stellah Nyanzi is facing.

However Magistrate Kamasanyu has reserved her ruling until 31st/January/2019, to give Dr. Stella Nyanzi another chance to appear as she is still presumed innocent, but only  being ill advised by his Lawyer.

The Magistrate noted that it is absurd to see that the Lawyer is now concerned about his client’s health and advising her not to attend Court, yet when Court reminded Dr. Stella Nyanzi of her right to bail in
November/last year,  her Lawyer did not utilise that opportunity.