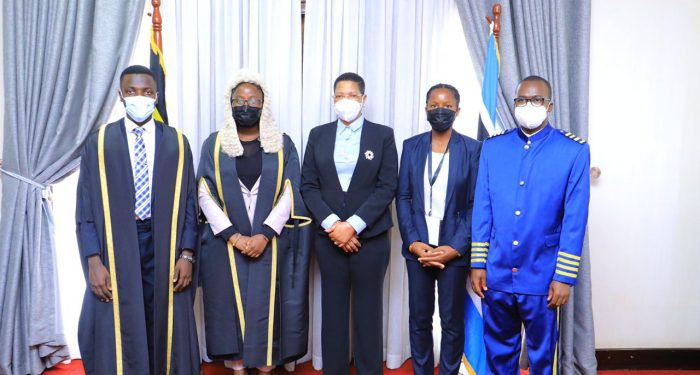 Speaker Among Tips Youth to Seek For Opportunities.

The Speaker of Parliament Anita Among has called on youths not to sit back, but take interest in the existing opportunities.

Among said that there are so many opportunities in the country, like the Parish Development Model and asked them to work hard if they are to benefit.

Among said this at that the opening of the Fifth National Youth Parliament held in the Parliament of Uganda Chambers on Friday, 05 August 2022.

The youth Parliament provides young people with a platform to express their legislative ideas, concerns and expectations. The resolutions of the debates then become part of key policy-making processes in the country.

The youth  elected their speaker, Speria Nakigudde and Deputy Speaker Francis Shaa Rubangakene who presided over the sitting.

Anita Among said that as a country with over 75 per cent of the population that is below the age of 30, it is critical that different approaches are used to address challenges faced by the youth.

She also cites the high population growth rate which greatly affects living standards and creates urban slums, land ownership issues, accessibility to loans for development, lack of access to social services and  skills among others.

She however, said that youths should not simply sit and wait, but need to be active in search of opportunities.

She said that foras like the Youth Parliament are supported to foster involvement of young people in key civic decision-making spaces, influence the policy and legislative agenda and nurture positive leadership development opportunities.

Among pledged parliament’s full support to the resolutions from the Youth Parliament and said that they will also ensure that the issues raised are shared with the relevant ministries for action.

Hon. Boniface Okot, the Youth MP for Northern Uganda who represented the Minister of State for Youth Affairs said that the mock parliament helps in building youths whose participation is entrenched in the constitution.

He encouraged the young people to seek ICT skills, and innovations to build an intergenerational solidarity.

“Take advantage of your numerical strength, your vibrancy and innovation to progress our continent,” Okot said.
Gonze Nicolas, the European Union Delegation representative said that the EU and Germany Government are committed to support the youths and that is seen from their support to the youth Parliament.

He said the EU has a long history of working with youths through its development cooperation.

“The EU delegation will also set up a youth standing board as a space for young people to engage with EU on its development cooperation,” Gonze said.

Hans Von Schroeder, the German Deputy Head of Mission said that they have established a youth advisory council that will advise on the German ministries cooperation strategy from the youth perspective.