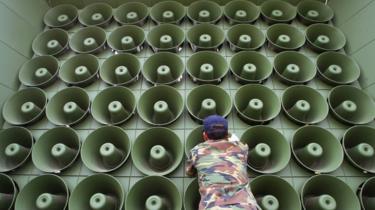 South Korea has stopped broadcasting propaganda via loudspeakers along the border with North Korea, ahead of top-level talks later this week.

The South has dozens of loudspeakers along the border area, which blast everything from K-pop music to critical news reports of the North.

The broadcasts can be heard by the North’s troops stationed along the border and civilians in the area.

Seoul said turning them off would help set the tone for Friday’s talks.

North Korea has its own system of speakers along the border, playing reports critical of Seoul and its allies.

It’s not yet known whether it will follow suite and silence them too.

South Korea said the speakers, which play propaganda over the border at high volume, were turned off in the early hours of Monday morning.

The move aimed to “ease the military tension between the two Koreas and develop a peaceful summit atmosphere,” spokesman Choi Hoi-hyun told reporters.

“We hope this decision will lead both Koreas to stop mutual criticism and propaganda against each other and also contribute in creating peace and a new beginning.”

North Korea announced at the weekend that it was suspending nuclear tests and closing an atomic test site. The surprise announcement came as the country prepares for historic talks with South Korea and the US.

Pyongyang’s leader Kim Jong-un is due to meet South Korean President Moon Jae-in later this Friday at the truce village of Panmunjom, marking the first inter-Korean summit in over a decade.

Mr Kim is also due to meet US President Donald Trump by June. It will be the first ever meeting between two sitting leaders of North Korea and the US.

South Korea’s propaganda broadcasts have been running on and off since the Korean War. The idea is to persuade North Korean soldiers to doubt what they are told by their leaders.

Their use has been increased and decreased over the years, following the diplomatic mood on the peninsula.

In 2004, the broadcasts were stopped as part of a deal negotiated between both countries.

But in 2015, after two South Korean soldiers were severely injured by North Korean-planted mines in the demilitarised zone (DMZ), the South turned its speakers back on. It was later halted again in 2015 and re-started in 2016 in response to the North testing a hydrogen bomb.

South Korea did not say whether it planned to restart the broadcasts once the summits are over.