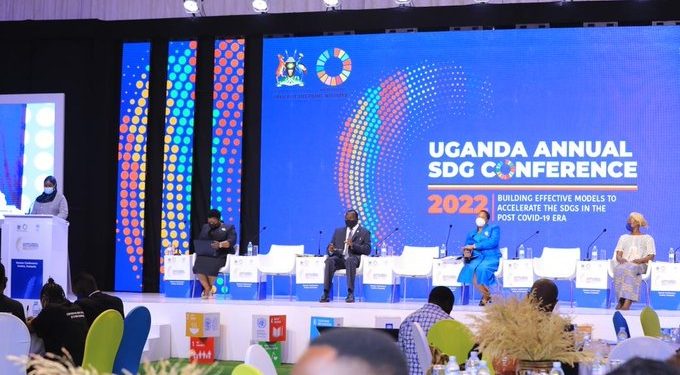 Speaker Among Commits to Implementation of SDGs.

Chief Justice Alphonse Owiny Dollo has called for a drastic transformation of the judiciary in terms of funding in order to enhance access to justice if Uganda is to succeed in the implementation of the Sustainable Development Goals.

This was at the Uganda Sustainable Development Goals Conference in Kampala where the Speaker of Parliament Anita Among. announced  Parliament’s Commitment to facilitate the implementation of the SDGs.

While speaking on the final day of the Uganda Sustainable Development Goals Conference held at the Serena Hotel in Kampala, Chief Justice Alphonse Owiny Dollo expressed the great need for government to step up funding for the Judicially to enhance access to Justice. Dollo revealed that government has a high deficit of courts of judicature and judicial officers which impedes the dispensation of justice.

The promotion of Access to Justice is SDG number 16 but Uganda has a long way to achieve it. The Chief Justice noted that shortages of judicial officers have badly affected the economy with over Shs 4 trillion stacks in the commercial court pending court decisions.

Owiny Dollo also attributes escalating cases of corruption in the Judiciary to a lack of ability to dispose of off cases timely which tempts litigants to extend bribes to the judicial officer to quicken justice in their favor.

However, some lawyers believe a performance review for judicial officers is necessary before recruiting many, saying many Magistrates, judges, and Justices have a tendency of absconding from duty.

Speaking at the same event was the Speaker of Parliament Anita Among who gave parliament’s commitment to facilitating the implementation of SDGs by overseeing and ensuring accountability for the efficient and effective delivery of expenditures, laws, and programs which have a direct effect on the people.

Among urged all stakeholders to ensure that implementation of the UN’s Sustainable Development Goals (SDGs) reaches the most marginalized and vulnerable communities as a way of enabling the country to register the desired goals.