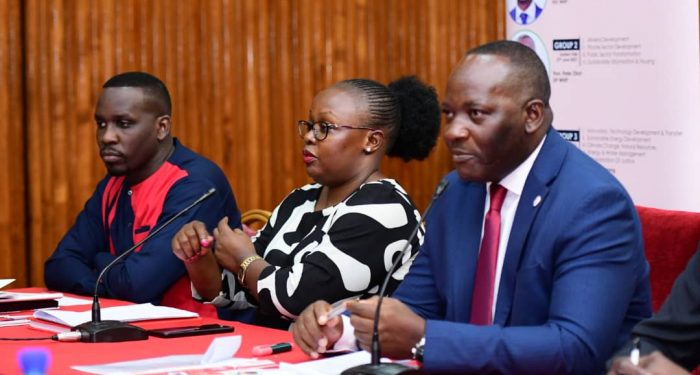 Mpuuga Accounts for 1st Year in Parliament,Calls for a Salary Commission to address Teachers Strike.

The Leader of the Opposition in Parliament (LOP), Mathias Mpuuga, has called on the government to establish the Salary Review Commission to harmonize wages of public servants as a way of addressing endless strikes of civil servants caused by salary disparities.

Mpuuga was speaking at the first anniversary of the leadership of the opposition in the 11th parliament, where he delivered accountability for the first year of office highlighting formidable strides registered in the short spell.

The opposition cited the recent parliamentary decision to terminate the controversial coffee agreement between the government of Uganda and Uganda Vinci Coffee Company Limited as a major milestone for the opposition since the matter was brought before parliament by the Shadow Minister of Agriculture Dr. Abed Bwanika.

Speaking on the ongoing sitdown strike by “Arts” teachers, the opposition offered government advice to expedite the establishment of the Salary review commission to look through the salaries of public servants and harmonize disparities that are causing an impasse.

However, Mpuuga expressed disappointment with what he called the failure of the Uganda Human Rights Commission to reign over perpetrators of human rights violations in the country. He cited the 2021 Human Rights Report which indicated that five Ugandans are still missing and tasked the commission to account for them. The opposition has also promised to slap private charges of human rights violations against individuals in government.

Moving forward the opposition has raised alarm over the alleged land reforms in the offing where the government seeks to amend land laws to provide for compulsory acquisition of land for government projects before prior and adequate compensation. Mpuuga vowed to resist the proposal.

Speaking to journalists at Parliament, Mpuuga also hinted at the intentions of the opposition to bring before parliament a motion for a deep inquiry into the loss of public land to the selected individuals which the opposition says it has been investigating.