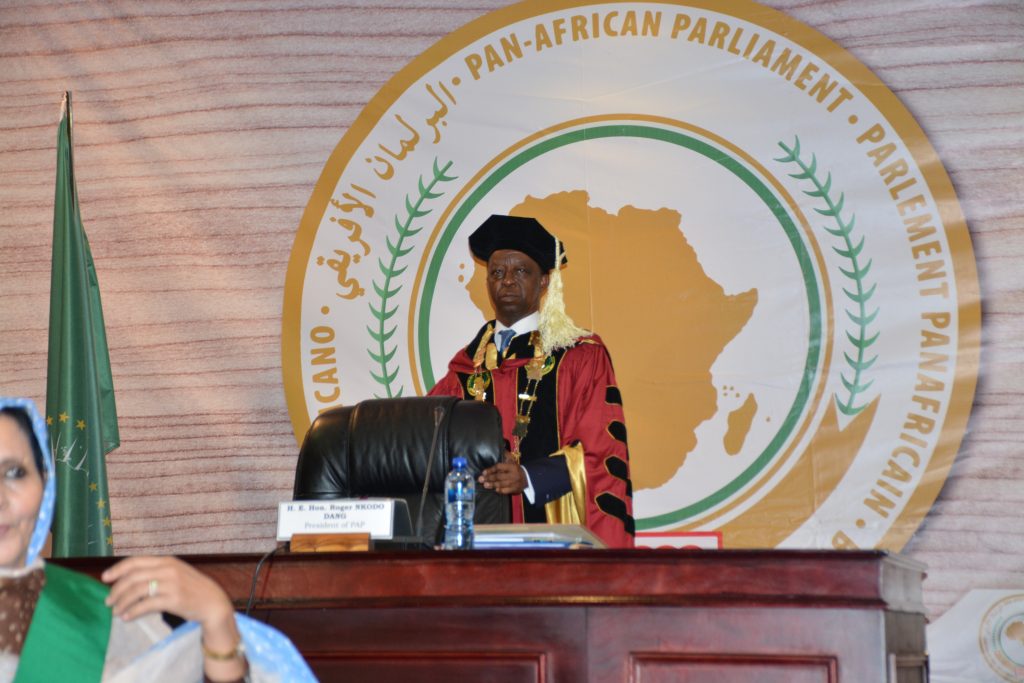 “I would like everyone who supported my candidature to receive my thanks and gratitude. You have demonstrated that I am capable to fulfil functions of President of PAP,” Roger Nkodo said shortly before taking oath of office where he vowed to “serve will loyalty and allegiance to the African Union…and promote principles of good governance.”

“This is a process in a democracy. The will of the people has been seen through the numbers. I congratulate Hon. Nkodo Dang for being trusted to head Parliament for another term,” he said.

The re-election of Central Africa brings to the fore the sticking issue of a rotational presidency in the Pan African Parliament. Northern and Southern region have not had opportunity of being at the helm of PAP leadership, a fact not lost to some MPs who see rotation as a principle espoused by the African Union, which rotates its leadership every year.

“We condemn such behaviour. The PAP needs to ensure that it fully implements the rotational system to ensure that each region is afforded the opportunity to serve in the Presidency,” said South African MP Mandla Mandela.

While some MPs welcomed the election result for being transparent, they still made reference to the need for rotation.

“The incumbent has won and that means he has the confidence and support of the Members,” Hon. Felix Okot Ogong (Uganda) said, adding that however, “The unwritten law in the PAP is that the presidency should be rotational. I think we now need to amend our rules to make the Presidency rotational so that other regions get to the helm of leadership at the PAP.”

The PAP also held elections for its Vice Presidents. The Bureau of the Pan African Parliament consists of the President and four Vice Presidents elected to represent the North, Central, Eastern, Western and Southern regions.

While there were originally eight candidates contesting for Vice President, two candidates from the Central Africa Region could not continue the race because the newly elected President comes from the same region.

The Pan African Parliament is one of the organs of the African Union. It was inaugurated on 18 March 2004 in Addis Ababa, Ethiopia and has its seat in Midrand, South Africa. Member States of the African Union are represented at the PAP by five MPs whose representation must reflect the diversity of political opinions in each national parliament.