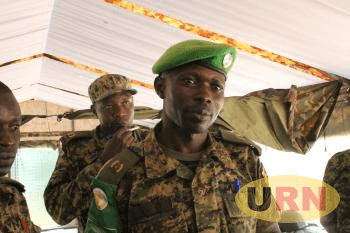 Maj Caesar Olweny says alshabaabs use a lot of propaganda, reporting anything without facts. He made it clear in an interview with URN in Somalia a week ago that Ugandan media should trust the factual reports sent to them by AMISOM rather than seeking alshabaab reports quoted by the international media.

When alshabaab recently attacked UPDF’s Forward Operating Base at Quoroyole, Buulo Mareer and Golwen in Lower Shabelle Region in Somalia, the alshabaab reported that they had killed over 50 Uganda soldiers. The alshabaab reports were published by international media like  Reuters, The Guardian of Britain, The New York Times among others.

If Ugandan media receives reports from UPDF whenever there are attacks in Somalia, Olweny says they should not listen to what alshabaabs are saying. He argues that alshabaab cannot be expected to report anything positive about UPDF.

Maj Olweny says UPDF and AMISOM are the source of right information on operations in Somalia. Unfortunately, Olweny says even when Ugandan media receive credible information, some of them take it as conflicting in the face of alshabaab reports.
” To us in the military, we have never heard conflicting reports. We always give the right reporting through the right channels”, Maj Olweny argues. He insists that Ugandan media should trust only reports from the “right people.”

There have also been situations when UPDF give causality reports that are later contradicted by the president. During the April attack on UPDF Forward Operating Base, UPDF spokesperson Brig Richard Karemire had said that four soldiers had died but President Museveni later said Uganda lost 8 soldiers.
In September 2015, alshabaab militants also carried out an attack at the AMISOM base in Janaale district, south of Mogadishu. UPDF reported that only 10 soldiers had been killed during the attack. But days later, President Museveni who was on a visit to Japan told the media that 19 Ugandan soldiers had been killed in the Janaale attack, adding that six soldiers were still missing.

Maj Olweny argues that in war situations – there are always three things which happen – death, casualties and missing soldiers. This, Olweny says that would mean that reports that come later give higher figures. When reporting on wars, he says journalists should always be logical.

Barcelona's unbeaten run ends with one match to go