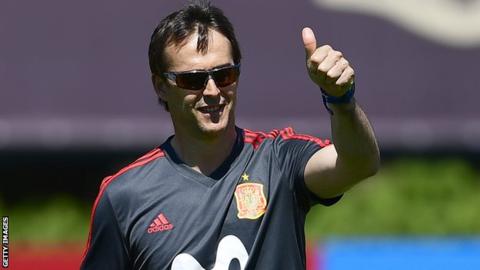 Zinedine Zidane, who led the club to three successive Champions League titles, stepped down in May, saying the club needs “a different voice”.

Lopetegui previously managed Porto for two years, before taking over at the Spanish national team in July 2016.

The 51-year-old will take up the position after the World Cup, which begins on 14 June.

Listen to the latest Euro Leagues Football Show podcast
A former goalkeeper, Lopetegui made one senior appearance for Real Madrid but played 107 matches for Logrones.

He began coaching in 2003 as assistant manager to Spain’s Under-17 team.

He managed Spain at Under-19, Under-20 and Under-21 level before moving to Porto.

Spain’s senior side are unbeaten under Lopetegui, having won 14 and drawn six of their 20 matches. They open their World Cup campaign against Portugal on Friday in a match live on BBC One (19:00 BST kick-off).