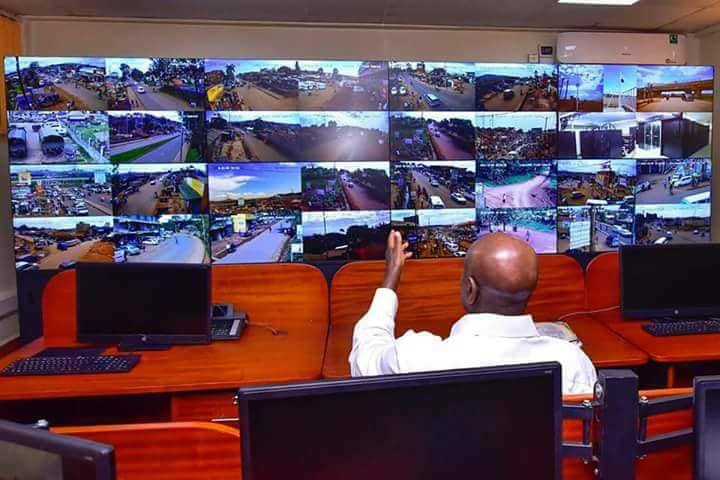 In the move to curb down the bickering insecurity in Kampala metropolitan area, President Yoweri Museveni commissioned the national command and control center for the CCTV Camera project at Nateete police station to beef up police surveillance in and around the city.

Museveni who was accompanied by the minister of security Gen. Elly Tumwine, state minister for Kampala Benny Namugwanya, IGP Martin Okoth Ochola and Deputy IGP Brig. Muzeeyi Sabiiti, remarked that the project is the last blow to urban criminality since it will help the police to monitor all corners used by perpetrators and respond in time. he noted that the government cracked down rural crime and now ready to do the same on urban crime

He added that the system is going to enable him to supervise police from state house and act on what he called sleeping police officers who don’t perform to their expectations.

Commissioner of Police Felix Baryamwishaki who is in-charge of the command center noted that CCTV project is going to make policing very easy since camera can give facial recognition of persons, Automatic recognition of number plates to enhance quick response. But he announced that cameras are only going to be placed in public places not in peoples homes.

But as Museveni was leaving Nateete police, he was mobbed by Nateete market vendors who intercepted his vehicle to expressed their grievances on their market whose future hangs in balance due to prevailing threats from the land lord. they claimed the facility was sold off by some government officials yet government had acquired a lease which is yet to expire. Museveni promised to act urgently on their cries and went with contacts of their leader.

Sofa 359 cameras have been installed in kampala metropolitan area but the police targets to install 3322 cameras on the first phase of one year which started in June this year and to end in July next year.

Judge Storms Out Of Sebuffu’s Case

Judge Storms Out Of Sebuffu's Case