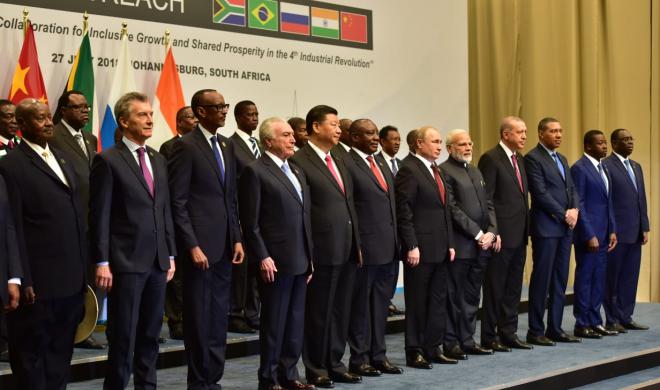 President Yoweri Museveni has told the new economic block BRICS (Brazil, Russia, India China and South Africa) that they or their companies can realize a high rate of return if they invested in some of the infrastructure elements such as building electricity generating units, the modern railways, some of the roads, some health units and some tourism units in the East African Region.

“The rate of return on investment for the companies in East Africa is always of a magnitude of 11%, compared to 9 % in Europe, 8 % in Latin America and 13 % in Asia. The rate of return in East Africa will improve with improved infrastructure, which means lower costs of production,” he said in his address to the BRICS Africa outreach summit at the Sandton International Convention Centre in Johannesburg South Africa.

“On the side of infrastructure, I particularly point out the plan we have for the Railway from Kenya, through Uganda to Congo, Rwanda, Burundi, South Sudan and Ethiopia. Tanzania is also developing a Standard Gauge Railway line from Dar-es-Salaam to Uganda, Rwanda, Burundi and through Lake Tanganyika to Congo. Such good infrastructure would enable us to trade more easily with Congo, Sudan, Ethiopia, as well as linking more easily with the outside World through the Ports of Mombasa, Dar-es-Salaam, Lamu, Tanga, etc,” he said.

“The EAC has already achieved the Common Market and the Customs Union status. This has helped businesses in East Africa grow. There are quite a number of Industries that greatly benefit from this integration of the East Africa Markets: cement, steel, milk, grain and cereals, veterinary drugs, just to mention a few of them. It will also benefit auto-mobiles manufactured or assembled in East Africa, the pharmaceuticals, some of the electronic machinery, etc,” he said.

The President said the BRICS Countries could easily find investment opportunities in East Africa in value addition to cereals, fruits, milk products, fish products, forest products, beverages, minerals such as iron ore, copper, nickel, tungsten, cobalt, coltan etc. These minerals produce steel and copper that are needed in all basic industries and are also alloys for metal products for specialized purposes such as heat resistance. We no longer want to export raw-materials for which we get only 10% of the value and also export jobs.

The President scoffed at Africans demonstrating against BRICS, saying they seem not to know who their enemy is.

“We salute, commend and encourage the BRICS Countries to continue and, when we need to, we co-ordinate. I am amazed to see some people who describe themselves as Africans “demonstrating” against BRICS. Those Africans seem not to know who their enemy is. If you do not know, ask; do not kutomera (bump into some situations). The BRICS Countries have always been part of our struggles, or they are part of us (Brazil) or were, actually, part of the struggles (South Africa). The BRICS and ourselves have every right to organize ourselves for mutual support”, he said.

Several groups had earlier protested near the Sandton International convention centre but the generally dotted protests did not stop proceedings from getting underway.