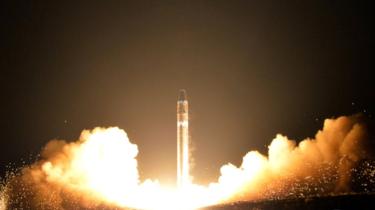 Unnamed US officials told the Washington Post that spy satellites had spotted continuing activity at a site that has produced ballistic missiles.

Reuters news agency quotes an official as saying it is unclear how far the work has gone.

Trump-Kim summit explained
Is North Korea sticking with its nukes?
Why North Korea is in no hurry to please the US
After the first meeting between sitting leaders from the two countries, the two men pledged to work towards denuclearisation. Mr Trump later said North Korea was “no longer a nuclear threat”.

But Mr Trump was criticised at home for making concessions without securing any firm commitment from Mr Kim to end the nuclear and missile programmes.

Image copyrightAFP
Image caption
The two leaders shook hand at a landmark summit in June
What do the latest reports say?
On Monday, the Washington Post newspaper quoted officials as saying North Korea appeared to be building one or two new liquid-fuelled intercontinental ballistic missiles (ICBMs) at the Sanumdong facility near the capital, Pyongyang.

The factory is known to have produced the Hwasong-15, the first North Korean ICBM capable of reaching the US.

However, a US official told news agency Reuters that a liquid-fuelled ICBM didn’t “pose nearly the threat that a solid-fuelled one would because they take so long to fuel”.

Reuters also added that satellite imaging showed vehicles moving in and out of the facility, but not the extent of any missile construction.

What are experts saying about this?
These are not the first reports that North Korea may be continuing its weapons programme, casting doubt on the real impact of the summit in Singapore.

Satellite imagery of the Sanumdong facility shows that the site is “active”, Jeffrey Lewis, a nuclear expert at the Middlebury Institute of International Studies (MIIS) told the Washington Post.

“[The facility] is not dead, by any stretch of the imagination,” said Mr Lewis. “We see shipping containers and vehicles coming and going. This is a facility where they build ICBMs and space-launch vehicles.”

Skip Twitter post by @mhanham
To be clear, we could not confirm all parts of the leak. 1/https://t.co/bo2fC5l1Vq

— Melissa Hanham (@mhanham) July 31, 2018
Report
End of Twitter post by @mhanham
Another North Korean expert from MIIS, Melissa Hanham, told the BBC that the facility had “regular traffic in and out of the building”, adding that this “traffic pattern” on the site stayed “about the same through the Panmunjom and Singapore meetings”.

This indicated that there had not been a complete stop in activity during the summit talks.

She also noted that large “brightly coloured containers” also showed up in satellite imagery, saying that “containers similar to these have appeared during previous ICBM inspections by Mr Kim.”

Ms Hanham added that while that experts at MIIS could not “find a way to confirm the [intelligence] leak”, the information has matched evidence from satellite imagery.

What was agreed on in the Singapore summit?
North Korea has carried out a total of six nuclear tests, the most recent of which took place in September last year. It has in the past two years quickly advanced its nuclear programme.

But at their landmark meeting in Singapore, Mr Trump and Mr Kim agreed to work towards the “complete denuclearisation of the Korean Peninsula”.

Image copyrightAFP
Image caption
The pair signed a document pledging they would work towards new relations
It’s been unclear what both sides mean by “complete denuclearisation”, and no further details have been released about when or how Pyongyang would renounce its nuclear weapons nor how the process would be verified.

Experts have also cast doubt on whether Pyongyang has been genuine in its apparent commitment to “denuclearise”.

What were the results of the Trump-Kim summit?
Did the summit rhetoric match reality?
Last week, it appeared North Korea had begun dismantling part of a key rocket launch site, but according to recent reports based on US intelligence leaks, Pyongyang might still secretly be continuing its nuclear weapons programme.

Reports had indicated that North Korea was upgrading its only official nuclear enrichment site, and was stepping up enrichment at other secret sites.

Last week, US Secretary of State Mike Pompeo was forced to admit that North Korea was continuing to produce nuclear fissile material, though he insisted that “progress is happening”.