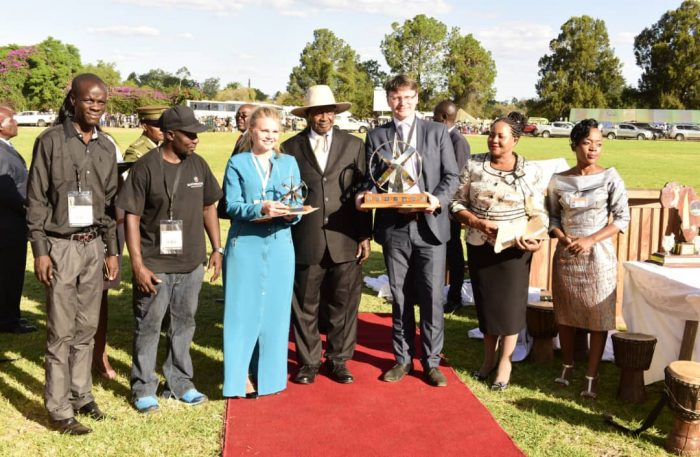 BULAWAYO, ZIMBABWE: President Yoweri Museveni has described the idea of sanctions by external forces as ‘cowardly’ and said leaders of the East and West met and agreed on peaceful competitions rather than sanctions.

“Why put sanctions? When somebody is wrong, leave him; they will fail by their own mistakes. When you put sanctions on them, that means you are not sure of them. I appeal for the lifting of sanctions against Zimbabwe,” he said.

The President who was also the chief guest was yesterday speaking at the official opening of the country’s 60th International Trade fair in Bulawayo in the South Western region of Zimbabwe. The fair is being held under the theme: “Growth through trade and investment”.

“Also this is a problem of us Africans, we don’t work closely together. If somebody puts sanctions on one of us, we also put sanctions on them. I don’t agree with those who say Africa is much weaker to work together. OAU and the frontline countries worked together to support the struggles for freedom in South Africa. If we discussed closely and cognately we can have a greater impact,” he said.

President Museveni is in Zimbabwe on a two-day official visit at the invitation of President Emmerson Mnangagwa of Zimbabwe. This is the second time that he is officiating as the chief guest at the fair, having done the same 30 years ago in 1989. The ceremony took place at the Zimbabwe International Trade stadium in Bulawayo.

“I want to encourage you to be steadfast in the challenges imposed on you by external factors. We shall stand by you. Zimbabwe is a rich country; lets work together and develop this huge potential of Zimbabwe,” he said.

He informed the huge crowd that in 1986 Uganda had no essential commodities such as sugar and soap but that the situation has today been reversed. “We had died and been buried..but we rose again. Uganda now has got one of the fastest growing economies in the World, Zimbabwe can do the same.

He said that we should work together to exploit the big potential of Zimbabwe particularly the wide range of minerals available in the Southern African country. He revealed that he and his Zimbabwean counterpart President Mnangangwa discussed the issue of exporting raw materials.

He gave the example of a country losing jobs and income through the export of unprocessed cotton. He observed that when the product is exported in its raw form, it fetches only US $ 1 as compared to a price of US $ 16 per Kg of the processed cotton products.

“But be of good cheer, don’t be discouraged. If we move together, we can move further,” he said. The President invited his host to visit Uganda. He observed that he last visited in 1963 while in transit to Egypt to train as a freedom fighter.

The Minister of Trade and commerce Welshman Ncube paid tribute to President Museveni for his leading role that has promoted peace and stability. He also saluted the chief guest for having scored big success in fighting against HIV/AIDS.

He observed that under the leadership of President Museveni, Uganda has addressed the issue of hyper- inflation that had gone out of hand when NRM took power in 1986.

MPs Trash The Majority Report on Sugar Bill,Debate Pushed to Tuesday Next Week