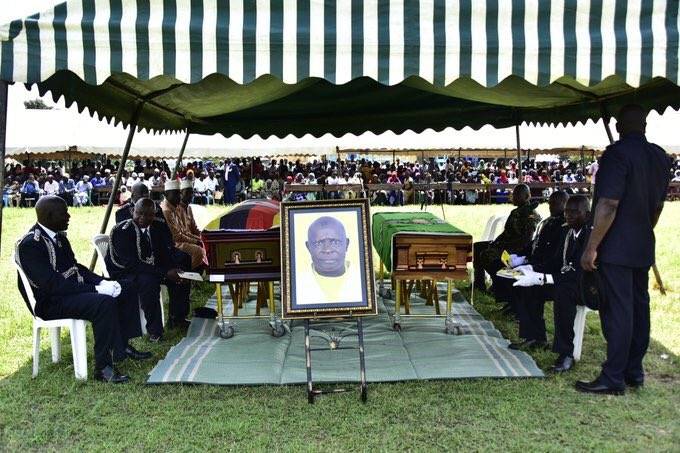 President H.E. Yoweri Kaguta Museveni pledges to support the family of the slain Arua Municipality legislator Hon. Ibrahim Abiriga and that of his brother who was his body guard until they both met their last day on earth.

Speaking at the burial ceremony today in Arua, President Museveni acknowledged the fact that Abiriga now fallen party member and former UPDF soldier was the anchor of the family and the clan at large.

He further says, the support will be channeled through a SACCO which the clan has to form for easy trucking and channeling of funds from the President’s office to them. “ I will give UGX.50M, so that people can borrow and it will act as their small bank.” Says the president.

With all the grouse attacks on high profile being executed on motor bike (Boda Boda) the President has ordered for all motor bike Boda Boda to have reflector number plates on their helmets for easy identification even during night hours as this will then stop killers from using this tactic to execute their missions.

Some of the High profile murders on Boda boda include, Major Muhammad Kiggundu’s,

Uganda Police Spokesperson, Assistant Inspector General of Police (AIGP) Andrew Felix Kaweesi, who was shot dead near his home in Kulambiro and below are some other prominent people who met their death in similar circumstances since 2012. Of those killed, 10 were Muslim clerics.

Just like the above high profile murders, Abiriga went through the same and now has been laid to rest at his ancestral grounds at Rhino camp in the westnile district of Arua where thousands of mourners gathered to say bye to him.

The fallen MP retired from the Army with the rank of colonel, later joined Parliament in 2016 after serving as the resident district commissioner for Arua and Yumbe