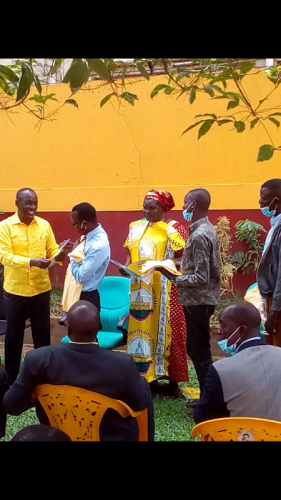 A considerable number of opposition political party mobilizers have dumped their parties in search of greener pastures in the ruling National Resistance Movement. (NRM)

While swearing their allegiance to NRM in the presence of Captain Mike Mukula, the NRM chairman for the Eastern Region at the party Secretariat in Kyadondo, the mobilizers said that they could no longer

stomach the disappointment of belonging to parties that have known nothing but losing to NRM.

They went on and revealed that their previous parties didn’t care much about them and lacked a clear strategy on how they would take leadership of the country. They further revealed that their previous parties have been negligent of their needs, saying that after using them to mobilize voters for them in the last elections; they stopped consulting them and completely shut their doors on them.

Remarking at the function, Captain Mike Mukula said that it is a serious statement when you see a Galax of minds migrating from other political parties to join NRM. It shows you how the party is going to perform in the next election. He welcomed them saying that it is high time they joined a party that is used to winning saying that Museveni is a winning horse and one should bet on a winning horse when he or she sees one.

He further called upon the converts to bring ideas that will be used to defeat their opponents in all elective positions come 2021. Mukula went ahead and encouraged the converts that president Museveni will meet them at an appropriate time

This comes at a time when the country is gearing up to go to the general elections in 2021. These elections are expected to be the first of their kind since the Electoral Commission declared that they will be scientific due to the fear of a spread of Covid-19 Pandemic that entered Uganda in March this year.