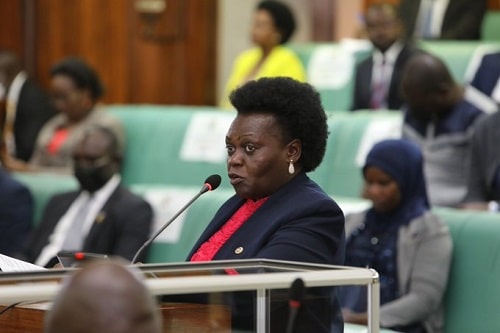 The Bill Seeks To Impose Timeliness for Alcohol Consumption.

Parliament has today cleared the Tororo district Woman MP Sarah Opendi to introduce the Alcohol Control Bill 2022 which seeks to prohibit the manufacture and sale of alcohol without a license and also seeks to impose a timeline within which alcohol consumers are in a position to consume their drinks.

Members of the trade committee have also been granted leave of the house to introduce the Consumer Protection Bill 2022.

Sarah Opendi (DWR Tororo) mover of the bill defended the enactment of the legislation arguing that as a result of passage of time and the changing circumstances, the current legislation regulating the manufacture, sale and consumption of alcoholic drinks, like; The Liquor Act Cap. 93, The Portable Spirits Act Cap. 97 and the Enguli (Manufacturing and Licensing Act Cap. 86 Were all enacted in the 1960’s and have become obsolete and do not address the current circumstances caused by the excessive consumption of alcoholic drinks.

In the proposed legislation, Opendi is seeking to prohibit the manufacture and sale of alcohol without a license and proposed to have anyone found flouting this provision to face a fine of 500 currency point’s equivalent to Shs10M or imprisonment not exceeding 5years or both.

Opendi is also seeking to impose a timeline within which alcohol consumers are in position to consume their drink, by having the sale not take place before midday and beyond 6Pm, however this provision wouldn’t be applied to supermarkets, mobile vans, deports, wholesale shops. She proposed a fine of Shs20M or imprisonment for ten years.

The lawmaker is seeking to bar sale of alcohol inside passenger vehicles, sale to law enforcement officers, persons below 18 years and any contravention of the said laws attracting monetary fines and jail sentences ranging between 3-10years.

Rose Obiga (District Woman Representative for Terego) seconded the legislation to regulate the consumption, manufacture, and sale of alcohol arguing that the high dependency on alcohol has increased domestic violence in homes and seen men abandon their families to quench their thirst.

However, some legislators believe the regulation of alcohol consumption should not be a business of parliament but the work of Local governments.

In the same vein, parliament has granted leave to members of the committee of trade led by Muhammad Sentaayi of Bukoto West to introduce the Local Content Bill 2022 The parliamentary committee on trade has re-embarked on plans to introduce a consumer protection law that will shield Ugandans from exorbitant pricing and unsafe products on the market.