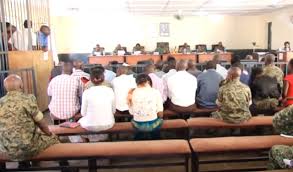 The General Court Martial in Makindye has handed a 40 year jail term to two men each, after admitting to being part of the Panga Wielding Group(Babijambia) terrorizing people in the Greater Masaka Region.

Jumba Derrick and Kizza Bukenya Matiya also aged 40 years each pleaded guilty to the offence on 16th/October/this year, saying its not the first time they were committing a crime, but that they were convicts already who feel sorry about their actions and would like the Court to be lenient to them.

However the Army Court Chairperson Lt. Gen. Andrew Gutti sentenced them saying the two lives that were lost due to the actions of the convicts, equally had families to take care of, but the convicts did not spare their lives.

He noted that much as death is the maximum sentence for this crime, but its no longer mandatory.

Jumba Derrick and Kizza Bukenya Matiya admitted to having murdered a one Moses Musinguzi and Shafik Kiggundu on
1st/July/this year along Mawogola Street in Masaka District, and having robbed the said Musinguzi of his gun-SMG rifle with 30 rounds of ammunition.

They also admitted having robbed 435,705,500 Million shillings from a one Moses Kallisa.

They were arrested with five others that include Retired Corporal Paul Kiwanuka, Waliggo John Bosco, Steven Kayemba, Tweheyo Julius and Jerevazio Kankaka who hail from Wakiso, Kyotera, Lyantonde and Luweero respectively.

These have since denied the offence and are on remand awaiting trial.