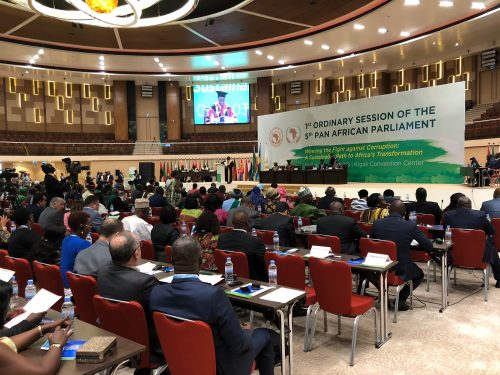 KIGALI, RWANDA: African legislators have converged in Kigali, Rwanda to discuss among others contemporary issues affecting the continent such as natural resources management and corruption, labour migration and the need to develop model laws.

The First Ordinary Session of the Fifth Pan African Parliament sitting, which is premised on the African Union theme of the year 2018: “Winning the fight against corruption: a sustainable path to Africa’s transformation”, is taking place at the Kigali Convention Centre, Rwanda from 22 October to 2 November 2018.

In his address to the legislators on Monday, the guest of honour, Rwanda’s President Paul Kagame, who is also the Chairperson of the African Union, commended the PAP for the breadth of their agenda for the session, which includes developing a model law on disability in Africa; conference on women’s rights as well as discussion and debate of reports on nutrition, corruption and election observation.

“The impact of your work is multiplied by your dual role as MPs for your respective legislatures. We count on you as advocates for Africa’s integration. I ask for your support for speedy ratification of the continental free trade agreement and the protocol on free movement of persons,” Kagame told the MPs.

He noted that the entry of the compact on migration would accelerate economic growth and shatter outdated perceptions of the continent.

“The responsibility for Africa’s security and prosperity should and must be in our hands. We should innovate and get solutions from Africa’s rich experiences and cultures even as we are open to the best global insights,” he said.
He called on the PAP to play a big role in monitoring political progress in the continent and holding institutions to account for commitments that have been made to Africa’s citizens.

PAP President Roger Nkodo Dang in his remarks said Africa should be a space of solidarity and dialogue. He said the continent posseses potential, which should be tapped and that it should cease to be a market for raw materials.
Highlighting the challenges bedeviling the continent, Nkodo said the cultural diversity of opinions which is at heart of any democracy is still a reason for division.

Nkodo said there is still a challenge of ratification by African countries of some of the Protocols of the African Union, in particular the Malabo Protocol, and hoped that with President Kagame at the helm of the AU, he would give added push to rally nations to ratify the Protocol.

“It’s our wish that you be the spokesperson of the PAP and the Bureau has decided to appoint you as the champion of the Malabo Protocol,” Nkodo said.

Currently, the Pan African Parliament is only a consultative and advisory organ, but the Malabo Protocol seeks to give it full legislative authority to make laws for the continent. The Protocol provides for the election of MPs to the continental assembly from outside the membership of national parliaments. It also provides for representation of two women out of five designated members per country.

The Protocol to the Constitutive Act of the African Union on the PAP was adopted by the Assembly of the AU in June 2014 in Malabo, Equatorial Guinea. Since its adoption, there have been only five out of 28 ratifications needed for the Protocol to come into force.

The Pan African Parliament draws membership from 55 AU member states with five members elected or designated from each country’s legislature.