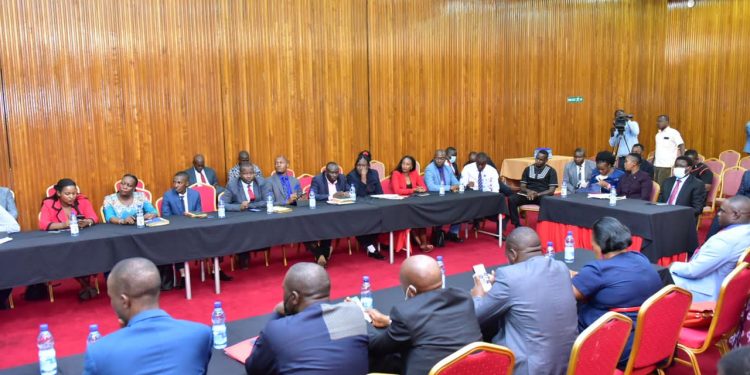 The opposition has also paid official tribute to the fallen speaker of Parliament Jacob Oulanyah and called for a deep inquiry into his cause of death.

As the race to replace the fallen speaker of Parliament Jacob Oulanyah heats up, the opposition in parliament has united and assembled two candidates for Speaker and Deputy Speaker positions after primaries. Asuman Basalirwa the Bugiri Municipality MP of JEEMA defeated UPC’s Jonathan Odur of Erute South to carry the opposition flag, whereas Kioga County MP Moses Okot Junior Bitek of FDC went through unposed to carry the Opposition ticket in the race for the deputy speaker.

The speakership position fell vacant upon the death of the speaker Jacob Oulanyah whereas the Deputy speaker position is getting vacant soon as the deputy speaker ascends to the top seat. The two opposition candidates vowed to give NRM a bloody nose in the polls slated for tomorrow at Kololo.

Meanwhile, oppositions leadership in parliament has officially paid tribute to the speaker Jacob Oulanyah by sighing in the condolence book. Mpuuga expressed grief over Oulanyah’s fundamental pledges that he has not got a chance to fulfill in his leadership that was cut short by death.