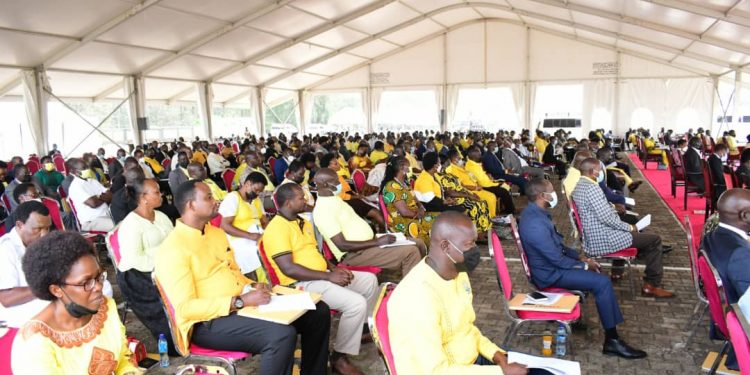 President Yoweri Museveni has finally briefed members of Parliament on the progress of the UPDF war in the Democratic Republic Of Congo against ADF rebels saying only three Ugandan Soldiers have been killed in Congo.

The NRM Caucus meeting in Kololo has not debated the fuel crisis and the escalating prices of household user commodities as it was anticipated.

Although the public anticipated the NRM Parliamentary Caucus to debate the issue of escalating fuel prices in the caucus meeting today, we have learned that it was not on the part of the agenda as it was referred to the next caucus meeting planned next week.

According to the government Chief whip Thomas Tayebwa, the meeting centered on the UPDF War as the president briefed the NRM Caucus on the progress of the fights against ADF rebels.

President told NRM MPs that Uganda has lost three soldiers in the war over three months UPDF has spent in D.R. Congo against thousands of Rebels that have been put out of action.

Tayebwa says, that after receiving a brief on the war, the government is now ready to brief parliament and seek retrospective approval to sanitize the deployment of Ugandan troops across the border, as the constitution requires.

The other pending business which has been scheduled for the next meeting is the discussion on the Parish Development Model and the issues of the electricity bill that is being considered by the parliamentary committee of Natural Resources.